Preventing 911 rear end from stepping out?

I realise 911s have the majority of the weight of the car over the rear axle making it hard keep the rear end from stepping out in corners. But is there anything I can tweak in tuning to make them more stable in FM7?

Dirtiest trick is to increase differential decel lock, of course.

On Rennlist I think there was some data on differential settings for the OEM 911 models. At one point they came with 85% decel lock, which is a lot. This is because the front suspension must be soft to combat entry understeer, which has the result of making the car generally oversteery during deceleration, which can be minimized with more decel lock.

However, all the fun in the 911 is in that snappy rear end. Throttle modulation mid-turn helps stabilize it to your tastes and the car hits high cornering speeds as a result. On exit you have endless grip so you can just floor it.

Increasing the deceleration lock helps a lot, but here is another good tip. Check the telemetry when driving, the 911 is very back heavy, a lot of the time the car is bottoming out which means you either need to raise the rear ride height, increase the stiffness in the rear springs and roll bars, or inrease the rear rebound stiffness and bump stiffness.

The game’s physics engine is not kind to rear wheel drive cars, especially in their stock tuning setups. But with a good tune the Porsche’s can be really quick and are fun to drive. They often have really, really good corner exit traction, with all that weight over the rear wheels you can just fly out of the low speed corners. Like others have pointed out they require a heavy rear bias in rear spring rate and ARB stiffness–but not as biased as you might think. Definitely not a min/max type of deal, in my experience. I have some really good Porsche (911) lobby and homologated tunes; my tuning process can be summarized as follows:

-Set the front spring rate so that you’re about at .75 compression under heavy straight line breaking. This changes with ride height, of course, which you want as low as you can. But you won’t always be able to set it all the way down while maintaining a F/R spring ratio roughly analogous to your weight distribution. So you might have to set the front ride height a few clicks above the minimum and adjust the spring rate until to achieve the aforementioned .75 compression. This usually ends up being about 2/3 the max value for me.

-Set the rear spring rate roughly proportional to the front based on the weight distribution. With the front at about 2/3 the max, as described above, I’m usually pretty close to the max. Start with rear ride height close to the same position on the slider as the front. You’ll make fine adjustments later as needed.

-Set the front ARBs so that you’re at about .75 compression on the front outside wheel in a steady state (relatively constant speed and turning radius) turn. Catalunya has some big turns that are good for checking this. Stiffer ARBs will absorb more force and transfer less weight (less body roll) to the wheel, resulting in less compression. Softer ARBs will have the opposite effect. Shooting for .75 allows you a little extra suspension travel for sudden movements and bumps and will ensure you don’t bottom out in most or all scenarios.

-Again set the rear ARBs roughly proportional to the front based on weight distribution, perhaps a little higher. You’ll fine tune this based on preference, softer for less oversteer and stiffer for more. I usually end up with somewhere in the teens for the front ARB and low 30s for the rear ARB.

This gets you a solid base to tune from and make fine adjustments to alignment and damping and ride height and even spring rate and ARB stiffness. I’ve used a lower front ride height (relative to rear ride height) quite a bit to tune out mid corner understeer. If you’re unfamiliar with the finer aspects of tuning I recommend looking up guides, they’ll serve you better than my half baked ideas

I reference this all the time when tuning: 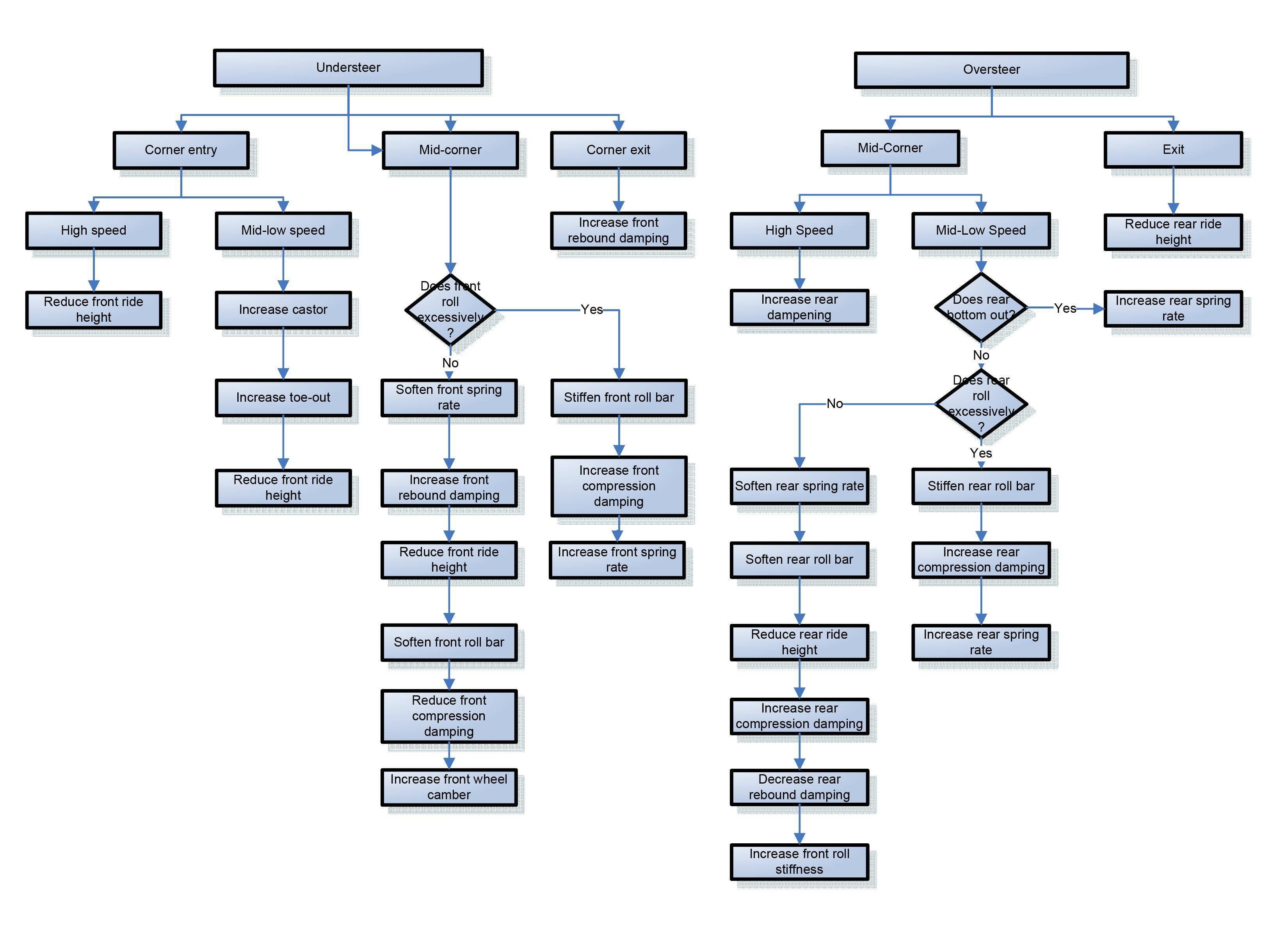 I used to operate under the assumption that I needed really low front spring rates and ARBs on Porsches, because of the weight distribution and bad understeer. I also found that the front inside tire often lifted. Try as I might I could not eliminate this with a min/max setup. In a min/max setup I’d bottom out the front suspension which makes for it’s own handling quirks even if it did remedy the understeer problem in some cases. I’ve had much better luck in making a nice, balanced, and fast tune with the method described in this post.

A few other observations:

-Porsches occasionally suffer from what I think is called “traction roll”, which basically means the outside (front, in a Porsche’s case) tire has too much grip and causes the inside tire to lift, or causes that dreaded lift throttle/mid corner snap oversteer. Sometimes you can’t tune this out, and you have to compensate by reducing front tire width. So for instance you’ll run max rear tire width but only stock or one upgrade of front tire width. This makes for a little more understeer, which can be managed to some extent with ride height, spring rate, and ARB stiffness. But you might have to deal with a bit of understeer for a nice, drivable setup. You can dump the extra PI afforded to you by thinner tires into power, so it’s not a waste by any means. I’ve noticed the track toy Lotuses often suffer from this, and need thinner tires (or less/no front aero) in some cases.

-The decel setting on the differential can be a lifesaver, as others have pointed out. I often run much higher settings than on any other car. It goes a long way in preventing the snap mid corner oversteer as well, just be careful as it can kick the rear end out upon braking if you’re not careful with your gear shifts. It also induces a little steady state understeer. But discovering this was a watershed tuning moment for me–some cars just need it.

I’ve really dug into tuning the porsches in this game and I have some great S class lobby tunes if you’re interested. I’ve a Leichtbau tune that drives like a dream and is fast enough to compete with near anything (except a Lotus Elise GT1 or GT40 cheeser) on most tracks. It’s my best Porsche tune, if not my best tune. Check them out if you like! I’ve found the hard cars to tune to be very rewarding when you finally get it how you like, so hopefully my experience shared here will help you experience the same!