Hello,
I specify that I am French and therefore I have a PAL Xbox 360 console.
I am contacting you because I want to enjoy the full content of the game Forza Motorsport 2 but i can’t
I bought it a few years ago, the game Forza Motorsport 2 collector version. The problem is that I couldn’t validate the DLC codes inside the box because they were no longer available on Xbox Live, so the codes were unusable.

So I did some research on the internet and I saw that there was a new version of “Forza Motorsport 2 Platinum Hits” which included all the DLC in a DISC bonus. So I bought this version but it doesn’t work on my Xbox 360 PAL because the game is "NTSC" 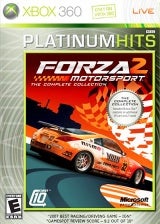 I think the only way to do it would be a transfer profile that I can download all DLC to my console , but who has all the DLC on his Xbox Live account ? and who would lend me his account? I think the chances are almost zero.
Do you have other solutions, other ideas I wouldn’t have thought? Buy a xbox 360 NTSC ? (it would be a shame to get there

)
Thanks for reading me

I would suggest if you have the proper codes to contact Xbox Support (at your localized number). They have the records of the various code, if they’ve been accessed before, and should be able to assist you with the code validations.

I agree the same thing happened to me, I had FM2 standard then bought the LCE just for the three cars only to find that the code had expired, to find out you can get the cars on a bonus disc that only works on NTSC is even more of an insult…it’s an absolute disgrace. There must be a way of getting the 3 LCE cars onto a PAL system from that disc? or can you get someones old console that has finished with FM2, or even X360 altogether, and transfer it to yours? OR if the worst came to the worst, get an NTSC console and the Platinum Hits version and be able to use it in England?

There must be a way of getting the 3 LCE cars onto a PAL system from that disc?

I am also curious about this. Maybe the disc is region free and the DLC works with the PAL version? If anyone has tried the bonus disc on a pal system, let us know!

I bought the US version to see and - of course - the bonus disc is also NTSC only. anyone with any other ideas? I don’t really want to have to buy a whole other console just to get my three cars at last and then not use it anymore, would it be cheaper to get my other 360 JTAGed or what ever it is called…mind you, I don’t really see why I should even have to do that.

Just to make things even worse I’ve just realised that it’s not 3 cars I didn’t get, it’s FOUR now that I have bought the NTSC version, because that includes the pre-order ‘2003 Nissan Fairlady Z Custom Edition’ car as well…HATRED!!