Unless there's some major changes

It’s time some things were sorted out.

First up is the random disconnections in any multiplayer. No reasons, no latency warnings, you just see others go straight on and you know the server is away to disconnect everyone. That’s seriously inexcusable given how long the game has been out.

Second, sort out the “track limits” system. Some corners you do so much as put one wheel on a kerb, it’s classed as being off track, others you can have all 4 wheels over the white line with no effect. Again, inexcusable, get that sorted out because you end up being given a “dirty lap” even when every corner gives you a “good” or “perfect” corner message. How is that possible.

Last, sort out the children who think that barging you off the track is acceptable in every single level and division of multiplayer. You end up looking at who is online when you join the lobby and then quit because you know someone will just take you out, and it’s ALWAYS the same people, as soon as they can. Defend a position, ok. Accidental door banging and rubbing, that happens. But there’s no excuse for ramming and there’s no excuse for NOTHING being done no matter how many times you report dirty drivers.

That last one’s a kicker, what’s the point in playing when you know you can’t actually race because some imbecile just decides to T-Bone you? So unless these things are sorted out, chances are FM8 will not be bought and paid for here, I have plenty of other options, Turn10 and Microsoft lose out, and I’m pretty sure I’m not the only one thinking this because what’s the point in paying for something you can get absolutely no enjoyment out of because of glitches and the same people behaving like utter tools with no penalty whatsoever.

Agree with the track limits. In real racing cars can put all four tires on the curb. Maybe if your all the way off for a specified time or the like. It is kind of irritating when you brake a little too late barely get that other tire on the curb and it is dirty.

The track limits are simple really, no more than 2 tires beyond the white line (or equivalent for a given track). If a third goes out of bounds, it’s a dirty lap. You can turn on an assist that shows you where the limits are if you need it.

Oh, if they were that consistent then there would not be an issue. But they’re not, on a single track you can have “limits” that allow all 4 tyres off track but no “penalty” but, later in the same lap, you do so much as merely TOUCH a line, never mind cross with only two wheels, and you get “penalised”. There’s zero consistency, and that is an issue.

There was an update to track limits at some point in FM7’s life, which is when the assist was added that gives a highly visible line exactly where the limits are, which change color based on how far past the line you are. Not touching it, it’s blue. One or two wheels, it’s yellow. Three or more wheels, it’s red. This has been entirely consistent.

Yet it doesn’t work like that, does it. Smack a wall and it’s sometimes “dirty lap”, sometimes not. On Road America, as an example, there are at least two spots where you can have all 4 wheels off the track and still be clean yet do so much as use an extra half inch of kerb at other points in the lap… That’s NOT consistency, is it.

if you turn on the boundary lines you will see on that track the curbs you are talking about is not where the boundary line is located. if it is what i’m thinking of, you can turn completely inside the curb. this is not the fast route to take it’s actually slower to cut the corner there.

First, can’t say for Xbox (I’ll get around to testing that) but the lines you talk of don’t appear on my PC version. I can set the track limits to flag or ribbon and nothing appears. And the limits I’m talking about at RA are when you run wide, so you’ve made it 3. I’m not saying it’s faster, but it highlights the inconsistencies I mention as on another couple of parts of the track you get flagged for barely going over a line.

And I didn’t want to burst bubbles, but I think AutumnalGlow is thinking about the “racing line” which changes colour as you approach a corner “slow but steady”, “close to going over the limit” or “OMG WE’RE GONNA CRASH”. That’s something different altogether.

On Road America track limit ribbons are visible for both PC and Xbox - I just checked and can make the ribbon visible on both platforms. The inconsistency is not about having 4 wheels over the ribbon limit but where T10 has actually positioned that ribbon limit. Most of the time they have the ribbon limit right on the painted line just slightly inside the edge of the asphalt track surface. On Road America at quite a few of the corners, T10 has positioned their track limit ribbon away from that painted line so it’s possible to have 4 wheels past the physical track limit line yet not trigger a “dirty” lap and then at other corners the limits are directly on top of each other.

I guess it was their way of trying to let you use more of some curbs than others. If you drive around at really low speed you can see the difference doesn’t seem to be more than the width of two tires but at racing speed it comes across as inconsistent because I can be off the track yet stay clean on some corners but not others. It’s easy to drive a car around slowly to see when the ribbon changes blue->yellow->red, go into photo mode and move around to see where the wheels are actually positioned relative to the painted track limit and the T10 ribbon limit definition. The other wierd one is at Prague “chicane” where the walls are angled to let you straighten the path a little but the ribbon and painted limits follow the cobblestones away from the wall - suspect most folks while racing go straight through and ignore the “dirty lap” penalty; same applies for parts of the Rio track.

What T10 really needs to do is properly review the areas where the FIA ignores the strict “4 wheels over the line” and adjust their limit to match what actual racing allows. 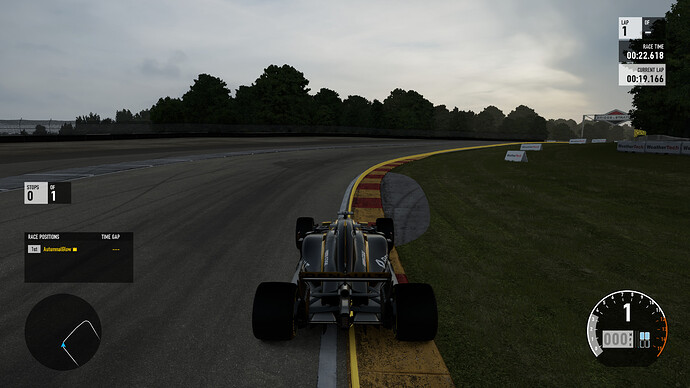 And on my lap around Road America, I couldn’t find a single instance of this line being anywhere other than on the white line or the edge of the curb, which is right next to the white line anyway.

Then there’s something wrong with my PC because I see nothing like these lines.

And there’s plenty others, I know the bit you mean at Prague (and how another, similar, patch has no penalty), Indy oval is a good one. Touch a part of a kerb, clean lap. Touch another part of the same kerb, dirty lap. Slap the wall on the exit of turn 2 hard enough to slow you down, clean lap. They’re everywhere but there has to be consistency. The common theme in FIA, ACO, etc, is “white lines mark the edge. 4 wheels over that, you’re off the track. Only exception is when there’s a wall in the way, which will slow you down.”. Is that too much to ask instead of this current “guess” system.

Ignoring the limits is an easy one to solve, even Horizon has a “slow down” programmed in for when you do things like hit a wall. If it can follow you on track, the gap, know you are off track then it’s easy to correlate gap and limits to force a slow down penalty. PC2 can, and we’re looking at something a bit newer.