It’s inspired by a real-world race Event called “Pikes Peak” but starting from… The Guanajuato Town!

Around 18mi long which makes you cross the town with tights turns, ending at the top of the Volcano!

Hope you will enjoy it as it is currently my first track.

Planning on creating a small road-race into the town as I love to drive old D and C-class cars - I’ll keep you posted, 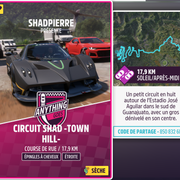 Nice ! I accidentally was thinking of the “pikes peak” hillclimb so I used the toyota celica st204 stock except for dirt tires. there are a couple braking points in/near town that allowed me to pull away from the AI … (I play 1 notch under unbeatable with all assists off except rewind, no damage) very fun climbing that hill at the end ! last night I worked at the road race “volcan sprint” took 10 tries before I finally found a untuned car to win with, the 370z … anyway, I think it would make a fun custom race to go up then down that path, though actually I think the reverse order would be better. anyway, I’ll try it with a street car now instead of rally car. I prefer ABC class cars (or sometimes low S1 on open courses) , trying to stay away from awd, seems FH gives them too much advantage. Thanks for your work !

Thank you for your feedback, I’m glad you like it!

Indeed, going down that path would be pretty cool aswell, but I recently figured there are now way to edit a track already made, so I hope devs are gonna do something about it!

Celica is a pretty fun car, I love those D-C-B and eventually A-class car as it doesnt feel to “broken”; these are really enjoyable. But yep, there is no dirt on my track except the few last meters haha