Two TV host/drivers. Identical cars. Silverstone. The only difference? One is driving the course in real life, the other is tackling it in Forza Motorsport 5. Who wins? That’s precisely the question a recent episode of EvoTV sought to answer, with hosts Tiff Needell and Henry Catchpole facing off on Silverstone National Circuit in the Audi R8. Who wins and how does the real car compare to its Forza 5 counterpart? Watch the video to find out: 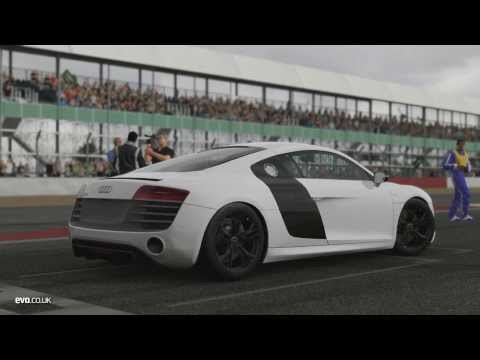 I noticed that the guy driving the Forza version of the Audi wasn’t really that good and I bet that I can beat ole Tiff.

There has to be some information about the tuning set up that he was using before we can try to win. Does anybody know if that car was stock or if that tuning setup is available?
Actually this would make a good monthly competition.

Yeah its a real shame the guy playing was awful. Steering all over the place and running up in the grass.

It would be nice to see how it compares with two both running clean laps.

You wonder how this airs like this? Once you get past the har har har he can’t drive it becomes pointless rapidly.

Anyone else notice the steering wheels were different?

Didn’t Top Gear do this several years ago with either Forza 4 or GT5? I seem to remember them doing it at Laguna Seca with a NSX. I think the game was about 10seconds faster.

Didn’t Top Gear do this several years ago with either Forza 4 or GT5? I seem to remember them doing it at Laguna Seca with a NSX. I think the game was about 10seconds faster.

Right track and car, wrong console (company) and Game title. Here is a link to a video of it.

I’d like to see the same person run on both the real and Forza 5 tracks in the same cars, stock. This would really be a fair comparison.

Top Gear USA also did it at Infineon for the launch of Forza 4 with Tanner Faust in a Lexus LFA driving the track, and Adam and Rutledge trying to beat him in the same car and track in FM4, needless to say they were rubbish also