The latest patch introduced a new Drifting Transmission. Once you put it into a maxed out
RAESER TS '19 it drops to A-Class due to it’s Top Speed being lowered to only around 20 MPH. By tuning the transmission manually, you can bring the Top Speed back —> now you can drive a S2 Class car in A-Class.

Out of curiosity… PC or XBox ? And if XBox do you have Cross Platform play fully disabled ? 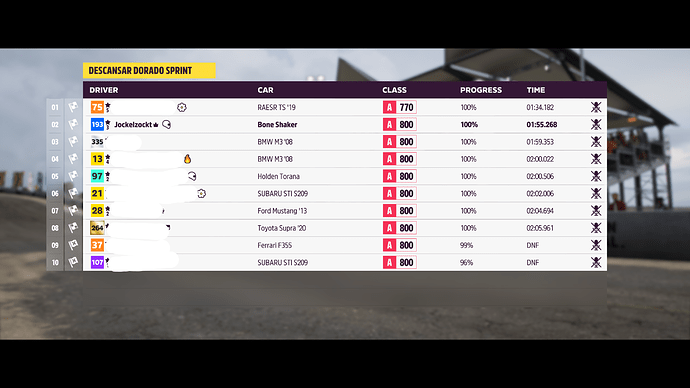 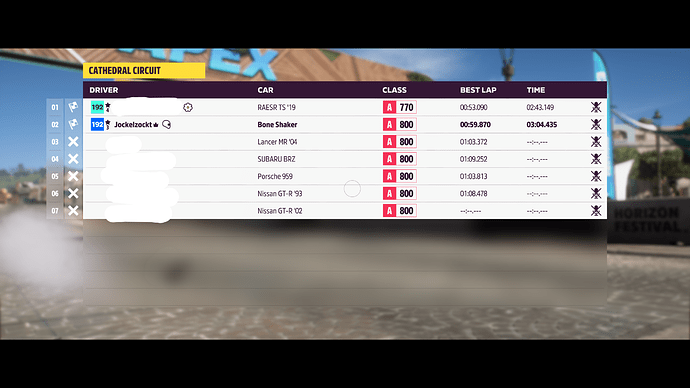 I’ve not been in myself so no idea, and well, sucks I guess, maybe, but…

EDIT : Did the graphic change ? I swear the times were different. Anyway…

He only beat you by 6 seconds best laps

…come on, you’re only complaining because somebody found an antidote to the OP Bone Shaker you were driving

To be clear, you’ve come to the forums to complain about a broken OP car beating your… checks notes… Bone Shaker?

I was thinking the same thing. I refuse to use the Boneshaker in any races no matter how much of an advantage the meta car gives me.

I’ve not been in myself so no idea, and well, sucks I guess, maybe, but…

EDIT : Did the graphic change ? I swear the times were different. Anyway…

He only beat you by 3 seconds best laps

…come on, you’re only complaining because somebody found an antidote to the OP Bone Shaker you were driving

I was only waiting for this. I was using the Shaker because I was trying to follow them in order to do some video recording. And on some tracks the Shaker is one of the fastest cars. It’s simple as that. It’s not about the car I use, it’s not about me crying that someone is faster than me, it’s simply about the fact that something weird is going on right now with this specific car.

OK Hoss, I guess we’ll see if more post “me too” here. Like I said, I haven’t been in so I can’t say if the “Lobbies being flooded with cheat/broken tuned RAESRs”. If so then yeah, something should be done. Just as quick as all the other cheaters and broken bits are fixed. Any day after infinity I expect.

This is not speed hacking. No other software involved. This is just upgrades.

This car, when fully maxed out, is in X class. But with the new drift transmission added in this update, it drops to A class 770.

That’s because the game’s PI system is mainly focused on top speed, and with default tuning the car can only go up to 30 km/h. But with tuning it can restore it’s top speed for a mid S2 car and reach 390 km/h. And since tuning doesnt affect PI, this car, having 1200 hp, with a 1:1 power to weight ratio, can race in A class lobbies. It can even beat the best S1 powerbuild on Rivals.

Side note: The Jaguar I Pace can also drop down to the middle of B class using the same transmission, but of course it isn’t as broken.

I am lucky that I haven’t met one of those yet when playing in A class lobbies. Hope they will fix it as soon as possible cuz it’s game breaking and I don’t think that is intentional. I also hope this helps others who are confused by this.

thank u so much for clearing this up mate! I get that lots of people hate the Bone Shaker but this is beyond any Boneshaker issues . It is as u say “game breaking” and needs to be fixed asap.

You’re welcome. I only knew this on YT after some big FH5 content creators posted videos about this. Just know that not even the BoneShaker can do anything cuz the Boneshaker has a power to weight ratio of 0.4:1 only. All we can do is hope that the devs can fix this asap. Btw, all the info I just posted are from those content creators so credits to them.

The devs broke something with a “clever” update ? I’m shocked !

All we can do is hope that the devs can fix this asap.

…not holding my breath. And also thanks for the info !

I guess his driving is not good. This car can lap anyone driving in normal A class cars even if the other driver is driving normally. There are videos about that on YT.

there u go <---- youtuber isuckatdriving explaining the issue

The issue with this is that the Raesr has the stats of an S2 car that can race in A Class lobbies, while the Boneshaker, thought definitely a very strong car, is still an A class car in terms of stats. BoneShaker is a car that is very strong in its class, but the Raesr is strong because it is in the wrong class. The two are different.

On a serious note: I do hope PG puts a quick end to it (and the I-Pace) and also removes/blacklists all Rivals times done with them. All A800 boards are getting ruined - more than they already were.

It further shows the low standard of their QA and lack of understanding of their own PI system.

Tried the custom adventure yesterday and it was a pure meta festival. 2-3 '74 Civics on Drag tires in every B700 lobby. Very limited fun.