This is the first season of Series 34.

The 1960 Porsche 356 RSR from Emory Motorsport is this week’s new exclusive reward car.

Earn 100 FP from the weekly challenge plus 10 per Daily, plus Bonus for all, double for owning the Lake Lodge

Weekly Challenge: (15%)
Must be done in sequence to count.

Daily Challenges: (1% each)
Each challenge is open for 72 hours from 7:30am Pacific of the start day.

The unique reward listed for seasonal championship events requires you to place 1st against at or above the Highly Skilled Drivatar difficulty setting; the Trial requires Unbeatable difficulty. As of Series 24 Playground Games rewards the car for all participants, win or lose.

Championship: “Down Under” | Dirt Racing | (A800) Australian cars

Completing the monthly events applies their completion percentage to all four seasons in the Festival Playlist:
6% for Monthly Rivals
15% for Online Adventure Qualifying 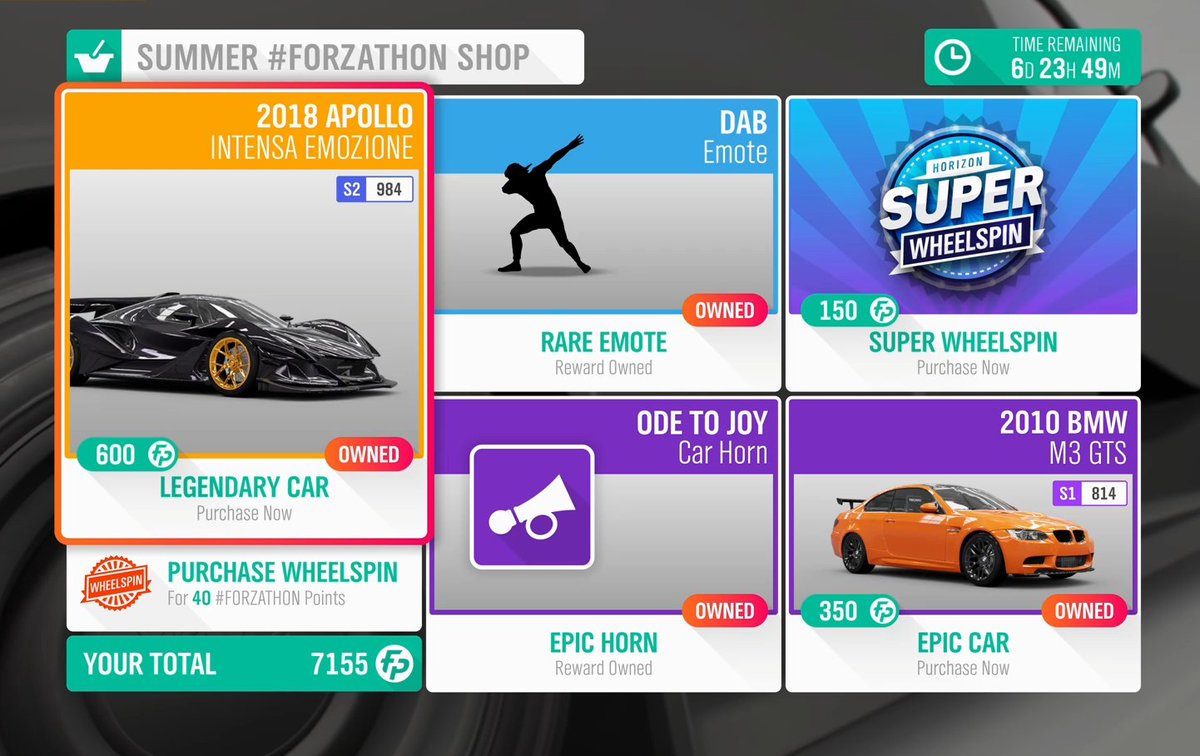 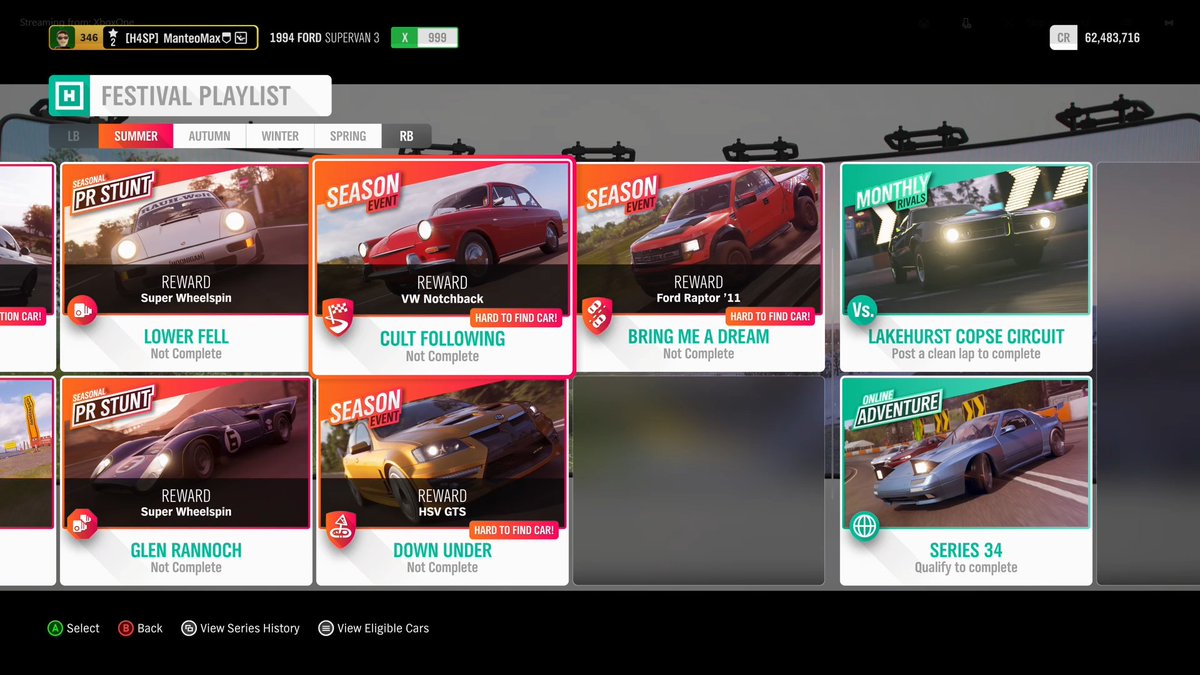 Zonda Cinque is my recommendation for the Trial, won it 3-0 despite some shenanigans at the start of the 1st race, hopefully it’s as easy as that for everybody else.

Mosler for the speed trap + zone and the Rimac for the jump used and just about to use the Regalia for the games, it always stands out yet is surprisingly good (credit to IngoingCake for the original idea).

Hopefully the seasonal event for the Firebird in Spring is something new, every other thing this series is a repeat.

The only completed bit for me is the ranked team adventure thing. This pleases me.

The only playlist item I’ve done is the Monthly Rival ('68 Pontiac Firebird), but mine shows all three regular racing championships as already completed (same as the week before) …despite being current on all system and game content updates including reboot.

Does anybody recomend any car from the forzathan shop to buy

Does anybody recomend any car from the forzathan shop to buy

I would go for the Apollo IE and use the Backstage Pass for something else.

A small tip. If you have difficulty to 3 star a speed trap in the weekly Forzathon try the Astmoor speed trap south of Mudkickers park. By far the easiest.

New series and my start to it brought me first ever FFA qualifying win.

Then to the trial and ever since new series stream showing Get Hyper title, I wasn’t really looking forward to it, at least I knew what I’ll be driving - a Pagani.
So its S2 998 road racing with hyper cars and its more like very fast bumper cars … wreckfest.
Quit first race on first try because of it, second try wasn’t much better, at least I managed to get away a bit and finish 2nd behind player’s Zenvo, second race and starting last, mixed with all the bumping wasn’t much different, again 2nd bested by one drivatar. Last race, started mid pack and managed to run away and coasted to a win. 3:0 for team.
Pagani Zonda Cinque Roadster, tune - 175 062 114
I so wish there would be an option to run trial solo.

Since there was already something like this, to get new Holden Group A, I just reused the car.
HDT VK Commodore Group A, tune - 130 623 025

Weekly forzathon and its return of Mercedes Benz Tankpool truck. I used my B 700 tune - 133 409 255 for winning 3 street scene events, then thrown bigger engine in it, to get 3 stars from Astmoor sped trap, then again switched to B 700 tune, went to highway in solo mode, to earn trading paint skills. 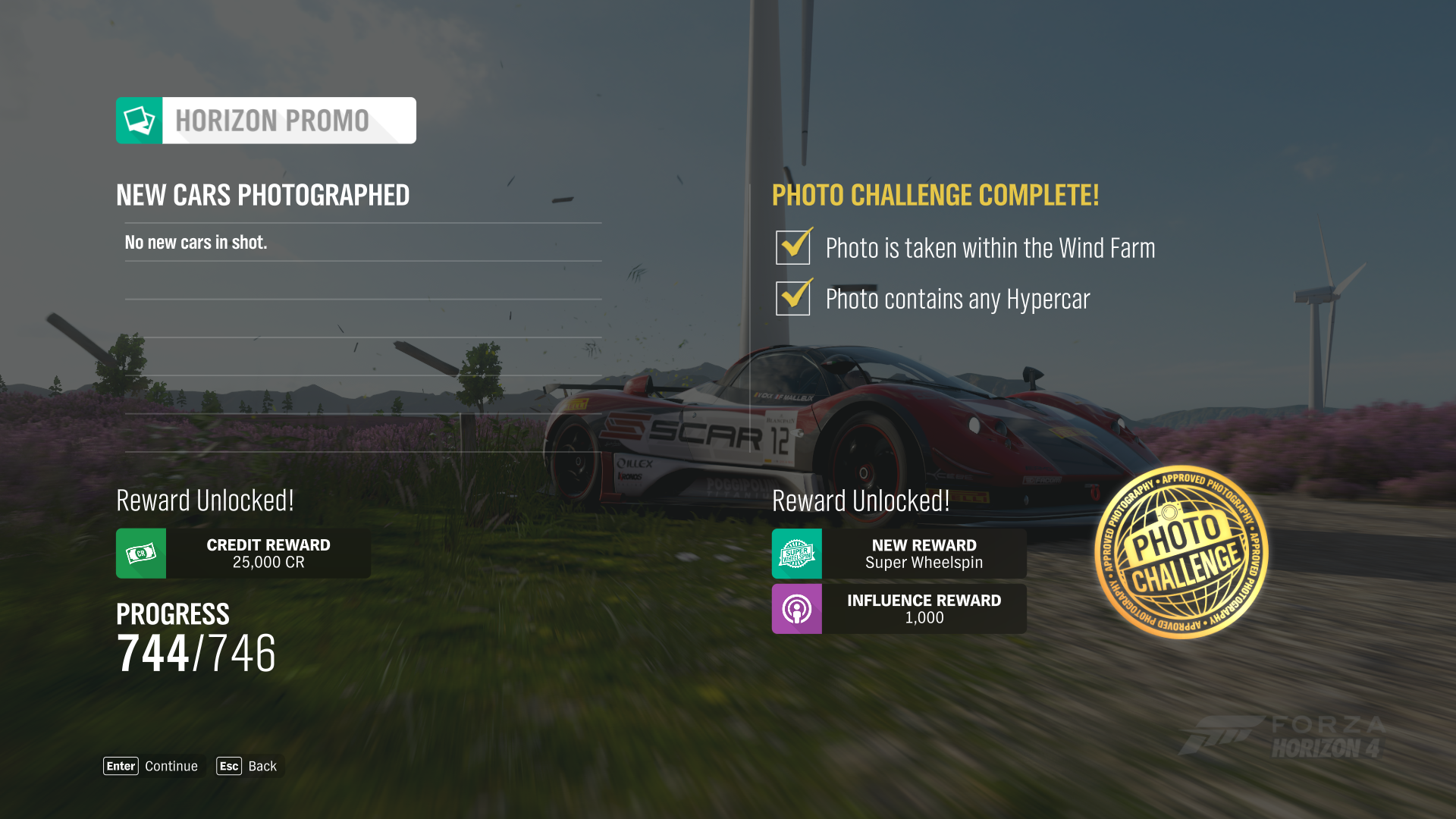 Hope this can be of any help to somebody, take care everyone and have fun, bb

Congratulations on your first FFA win El B!

I tried the Rimac for the trial on the basis I thought it couldn’t be that bad. I was wrong. It is a terrible car. I think I managed to just about get top 3 in all races but the fact the car doesn’t turn combined with some fairly annoying teammates meant it wasn’t a great experience. I’ll have to try it again with a sensible car choice.

I tried the Rimac for the trial on the basis I thought it couldn’t be that bad. I was wrong. It is a terrible car. I think I managed to just about get top 3 in all races but the fact the car doesn’t turn combined with some fairly annoying teammates meant it wasn’t a great experience. I’ll have to try it again with a sensible car choice.

I used the Zenvo TSR-S, just to use something different, and won all 3 races.

Yeah I’ve just redone it in the 918 and Venom, neither of which I use often, and was about 5 seconds per lap quicker at Holyrood compared to the Rimac. It’s just a really poor car - I was slower than I am in some S1 cars.

1st cleared off the playground and Unbeatable online stuff.

Any suggestions for car to use in rest of championships?
My thoughts though:
D500 Van and utility: Transit Van.
D500 Cult: Mini Traveller.
A800 Aussie: Maybe I have a Ute for this. Not sure yet.

For speed cameras and the jump I used my “old” Koenigsegg Jesko. Got a tune from someone and its nearly God Like.

Also participated in both monthly things;
Put up a clean lap, with some drifts, so I can put up a faster one, later on, if I wish to do so.
Adventure Racing, twice, and got into League 12, top of L12, almost into L11.

Just made the Van thing.
IN A KOENIGSEGG JESKO!!!

So: 125% bonus for difficulty, three easy races, kachingg, Thank you!

. Good job you managed to win!

I do wish they put some thought into the trial. S2 racing, in Hypercars, and the first two tracks have immediate corners. Wonder what’s going to happen there with no ghosting?? The second course is also pure handling really, which doesn’t suit the Hypercars at all - sprints where we can really put the throttle down are so much better to showcase them.

I was expecting the trial to be worse than last week but it wasn’t. I used a Senna with some updates from the last time I ran it. It’s shared as Road if anyone needs. The starts were messy. At least they are dry races.

I completed the truck challenge with a B700 tune for everything up to the speed trap. Then a max tune for running the Astmoor speed trap.

Edit 2: Everyone may want to hold onto their 65 Mini Cooper for a few weeks.

These are the Hypercar tunes I have for S2 which may help anyone having problems with the trial:

The first 6 I’ve done the trial in and they can all win all three races. The Senna and Veneno are the easiest to drive, with the others being quite a lot more challenging. The last three are all “wet” tunes but I’d imagine that they’d be fine for these conditions as well.

Seems to be a lot harder to win overall this week. Only at 4-3 team win-loss so far.

S2 Hypercars is always Aventador SV time and it never fails me. Simply the best >1MW car in S2 imho. Given the three tracks of the Trial the strongest options should be the Zonda C, Senna & Lego Senna.

Manteo - quick correction: the Trial reward is the Veneno. The bunny outfit got left in from last week.

So it looks like the Senna was a popular choice. I was deciding between that and the Italdesign, I have a good tune for that. Not too impressed with my Centenario tune yet.

So the Senna ran well. Not my fastest tune but very stable. However the AI was nuts. Literally skittering back and forth across the roadway. Like full on sideways movement. Once you got past them, it was easy to move on. Won 3:0 but because of vehicular combat, only managed one first, a third, and a fifth. And no ghosting even when cars were full on sideways crashed. Just brought you to a standstill. So mildly aggravating.

And this week’s Rivals is…Lakehurst Copse. Are you guys doing this on purpose? lol

Finished the rest of the events, will post those tomorrow. Set a few new PB with the PR stunts, so yay me. lol