Sinkhole at the Corvette Museum

It is sad to see any collector vehicle lost.

what a sad day

I cried when I first heard about it this morning.

UPDATE:
Sorry its been a while, but they are making real progress today. Around 8 or 9 this morning they went to work to start pulling some cars out. About 10-20 minutes ago, they have successfully rescued the 2009 ZR1 Blue Devil! They also plan to get the 1993 40th anniversary out as well. They have live streams and web cams where you can see their progress.

I’ll update whenever they rescue another car.
Live streams:
http://www.cnn.com/video/data/2.0/video/cvplive/cvpstream2.html
http://www.ustream.tv/channel/national-corvette-museum- currently down.

UPDATE 2:
Well the 2009 ZR1 Blue Devil actually runs and has little damage from what I can see.
The 40th Anniversary has also been pulled up, but is in much worse shape. That one is pretty messed up, but not the worst.
National Corvette Museum’s FACEBOOK has pictures.

Yeah, the Blue Devil is running but leaking a lot of oil. Then there is some clear body damage, but overall it might make it.

The red C4 looks pretty bad. I haven’t seen anything on the rest yet.

I am a die hard Ford guy, but those pictures break my heart!

UPDATE:
They got the black 1962 and it is reported that it is mainly body damage to that one. They are now securing the hole, which will take 3 weeks, then remove the remaining 5.
So Here are pics of the 2009 ZR1 Blue Devil and the black 1962. the 1993 Ruby is already posted.
Blue Devil:

- Yes they hooked it to the engine bay for better support

Well a surprise today was they happen to get the 1,000,000th corvette out. So half are now out of the hole.
This corvette is not well. smashed windshield, dirt everywhere, and the back axle is broke. probably more damage than that, but that’s what I can see from the pic. I’ll put more pics up then I see em. 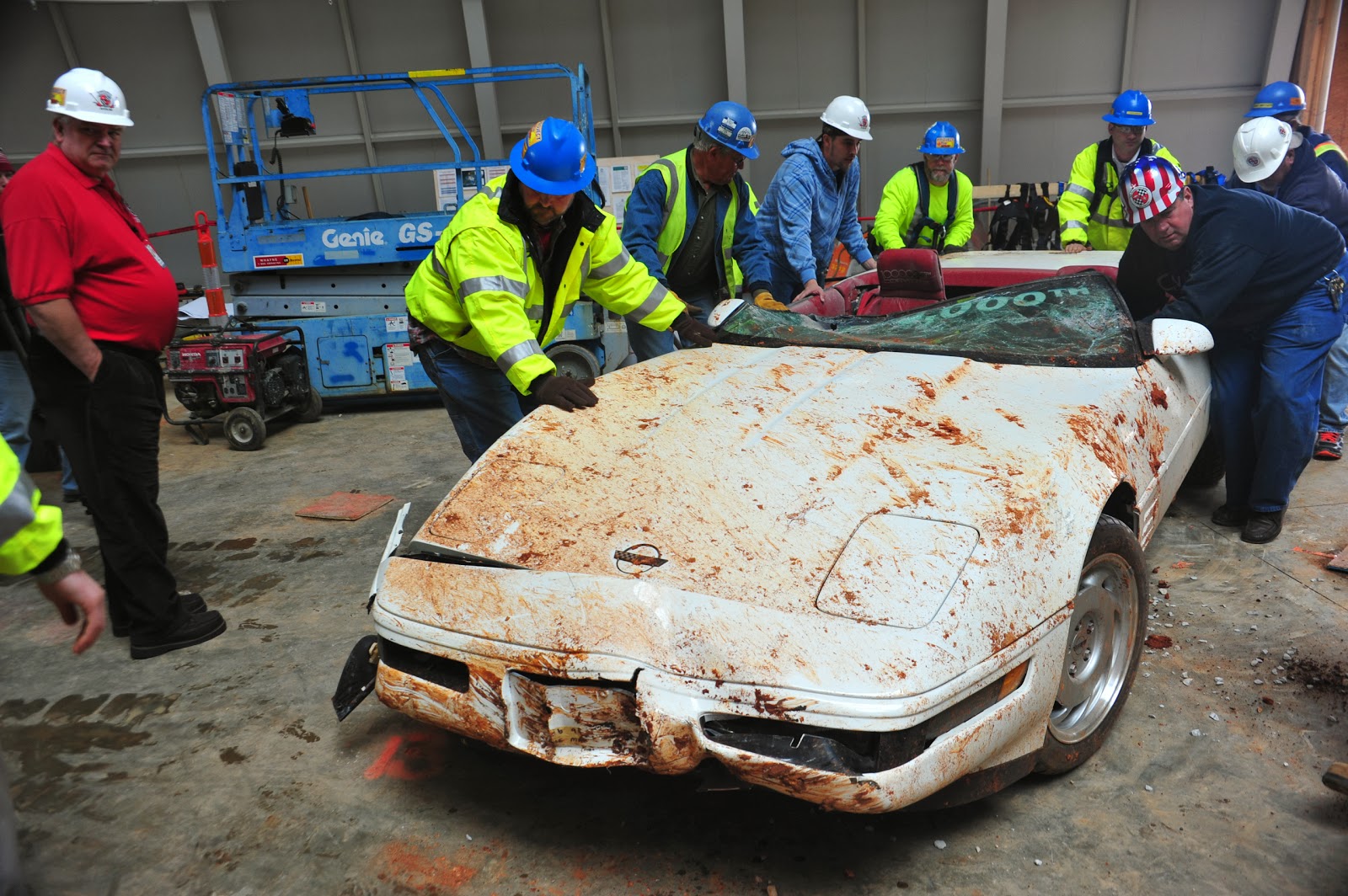 Surprise 2. They also decided to pull up the 1984 Pace car… That is in trouble. Smashed

Well after another few days they got 2 more.
The 1.5 Millionth

and the ZR1 Convertible

Both are hurtin a lot.
The other piece of news, is that there is a possibility that they won’t fix them immediately. The museum is getting a lot of publicity due to this and are currently displaying the cars they get out of the hole. There is word that they will fix them, just not immediately.

The final Vehicle to be found/pulled out is the 01 Mallet Hammer Corvette.

I was ready to buy those cars! LoL. I don’t know what to say, really. I think it would be good to move the museum. Joke. When I looked the pictures, there was a video playing, and I was like: what is going on? Where is the video. I’m stupid. I didn’t check the little audio bar…

When I read the title for the first time, I said: This can’t be good!..
Sad day for Corvette history. Hope they clean AND repear the Corvettes.

Yea Racer, it sucks
As the next bit of, eh, news I guess. is they got the 01 Mallet Hammer…
They got it… it ain’t good at all, but they got it…

Yea Racer, it sucks
As the next bit of, eh, news I guess. is they got the 01 Mallet Hammer…
They got it… it ain’t good at all, but they got it… Someone who is rich and stupid will buy those cars! This is craziness!

I’m still hopin that they will be fixed by GM, the Mallet is an I don’t know, but eh whatever. I doubt they will ever be for sale though. since they were donated, I would assume there are special stipulations that they can’t sell them, as some of the donators are lifetime members so they can still see their cars.

As much as I like all of them, I found the Mallet to be my favorite. I was hoping it would be in a bit better shape when it was found. And yea, I’m pretty happy, that some of them weren’t as bad as the one’s that have been recently been recovered.