I thought it might generate a little interest to create a Rivals thread. No prizes save for the prestige of beating your fellow posters! Currently, we are just running ad hoc rivals events so check out the latest posts in the thread to see which events times are being set at.

Screenshots sound a good plan but if people just want to post without evidence that’s fine - not as though there are any prizes!

I’ve only tried a DB11 so far and am yet to get near any of those times. I now recall that this isn’t my favourite circuit.

My best in any S1 car from my pre-rivals spreadsheet is only 50.5, so there’s probably no chance of me beating Rayne’s time, though I’ll give that car a try some time.

The 599 GTO was the only car so far with which I could break into the 49s.

(added you too by the way)

Started out around 58 secs and whittled it down using Valorster’s tune until I got to a high 51 and couldn’t improve any more. Had a second session in the early hours this morning where I tried out a couple of different tunes, times dropped quite quickly using jvvyyy’s ‘HANDLING’ tune.

I’m not sure I can get any faster but will probably give it another go tomorrow and possibly try some of the other cars if you guys are sharing your tunes for them?

I could share mines tomorrow. But they are not for everyone. 200% brake pressure, no front aero, quite oversteery.

Up to you Rayne, I already follow you in game & used your S1 Goliath tune for the McLaren 12C.

My main thing in Forza has always been painting. I can’t tune cars to save my life so really appreciate the work you guys put into it & I’m quite happy to try out different setups.

I’m currently at 51.2 but think I can shave a little more off that in the GT-R. Don’t think I could get near that 50.5 Midnight has done though - looks a near perfect lap. I’ve done very similar times in the Vantage and GT-S. Also haven’t tried the Ferrari yet so that may be quicker.

… Don’t think I could get near that 50.5 Midnight has done though - looks a near perfect lap.

Me neither, LoL!!! Given it an embarrassing amount of laps but consistently running 2 or 3 tenths behind so I think I’m done as far as that car is concerned - although it’s a shame I’ve been nudged out of the top 100……

I could get a bit closer to MD but don’t think I could catch him. No idea if anyone other than the four or us who’ve posted here are on this forum - although Beermachine is a very new entrant on the list (and it’s a slightly weird car choice otherwise).

Rewind constantly not working in Rivals is beyond annoying.

Rayne, I tried the 599 GTO & I think if I’d run more laps I’d probably PB with it. Definitely requires more technique on my part… or if I’m not up to it I might have to try a couple of assists

I’ll definitely try it out on other S1 Rivals though.

Yes, it was good fun.
Yesterday I improved my GTO time with the GTR to a 49.933.
But I had the impression the Ferrari can do more. After another 25 laps I dropped the time to 49.766 but now it feels like I hit my limit.

Do you want to choose again as winner Rayne? New rule though that winners can only pick two weeks in a row. Give someone else a chance when/if you win again!

Nah, I’m fine with someone else having a go this time. Makes it more interesting for me as well if I have to adjust to new ideas

Ok - Midnyte feel free to choose a track, car type if you get a chance. If not, I’ll suggest something tonight.

Ok - Midnyte feel free to choose a track, car type if you get a chance.

I was afraid you were gonna say that!

Ok, apologies in advance if this turns out to be a bit naff - like I said before I’m only a part timer, LoL! Did a bit of research and found a Track/Class which I haven’t set a time at yet and where I couldn’t see any of the previous listed Gamertags in the top 100.

There are 33 individual vehicles making up the top 100 featuring something like 7 or 8 car Types - the most popular being Retro Sportscars, Classic Muscle & Classic Racers with 6 each. Had a quick 3 lapper vs AI in a stock Car from each Type and decided on:

What do you think???

Sounds good to me. Will update the thread later.

Had another early morning session & surprised to find myself sneaking into the top 100 with a time of 1:01.728 which is a full 5 secs down from my first outlap. Using the ‘68 Alfa Romeo 33 Stradale, flitting between 3 different tunes but DJS’ is the quickest so far. I hardly ever run cars without a design on them & even more rare for it not to be mine but…… got to hand it to PTG FOX for this one! 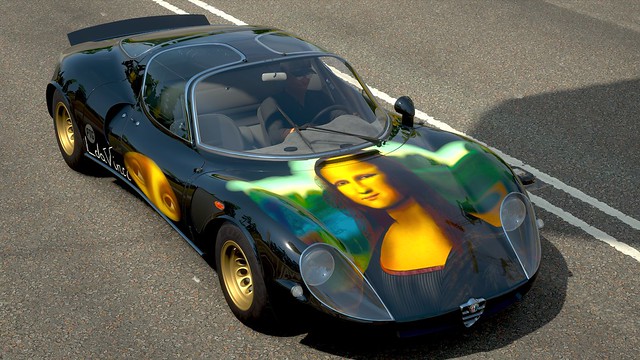