I’m going to post a video later, but I’m curious; is anyone else seeing some odd behaviors with drivatars in solo mode.

In freeroam mode I have seen one try very hard to drive up an extremely steep hill and I’ve seen two side by side seemingly parked, but possibly trying to drive through a wall.

Also, is Horizon 2 pulling it’s drivatar data from Forza 5? I have quite a few people on my friends list who have played Forza 5, but have not played Horizon 2 or the demo.

I saw a lot of them trying to get inside walls and few just stand still in the middle of the road. And yes, they pulled the drivatars from Forza 5. However, I noticed that there’s some friend’s drivatar that has never played any F5 or FH2 at all. Maybe it’s just me…

I saw a lot of them trying to get inside walls and few just stand still in the middle of the road. And yes, they pulled the drivatars from Forza 5. However, I noticed that there’s some friend’s drivatar that has never played any F5 or FH2 at all. Maybe it’s just me…

No, I have drivatar friends roaming the World who have never played a forza title before. They’re always level 1 but they’re around…

Anyways, I’ve seen odd stuff and annoying things too. I’ve seen them parked: not trying to drive through anything, not even revving the engine, just… AFK. More annoying is the ones that aren’t parked seem to have ZERO collision avoidance. Sometimes it’s like they’re TRYING to hit me. If I’m trying to cruise and I see drivatars coming, I just pull off the road and stop (and half the time they STILL just drive straight into me).

The absolute WORST, though, is how they constantly crowd around me and randomly brakecheck on roadtrips, overtaking at race speeds only to slam on the brakes and swerve all over the road. You get 2 or 3 of these drivaterrors doing it and they just go nuts, driving right into me, each other, traffic cars, trees, whatever. This can completely ruin roadtrips: I find myself going flat-out to stay ahead of them, or charging overland to avoid them entirely. Trying to take Ben’s advice and “enjoy the drive” just results in a game of bumpercars.

FM5 had issues with idiotic drivatars at launch as well, but eventually got better, hopefully the same happens here. FH2 is truly one of the best car games in ages (imo), this drivatar behaviour though… it just won’t do.

So as promised here is the video I put together. Pretty much everything you mention B Wald. 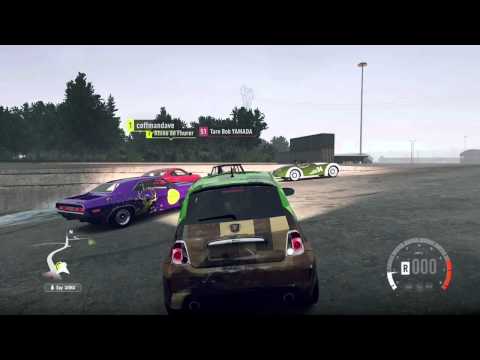 Touché, Mr. Mod. Then again, I’m the Player Character; I’m ALLOWED to drive like that*

Says? More like shouts at the top of his lungs as he chases you with a pitchfork.

My Italian isn’t that good. I am assuming this means “Get out of my vineyard”. However, I thought the imperative of scendere was scendete.

Back to the topic at hand. I have seen the drivatars do weird things. I have seen them parked for no reason I can think of. I haven’t seen them ramming parked cars. I have also seen them grouping into a clump during races. This is really bad if your among them and it is an off road race. I have seen at the start of a race the car beside me come over and ram me when the race starts. I have no idea why it does it. It hurts both of us.

I was wondering about the parked cars. I realized something. If I get interrupted while playing, I pull the car to the side of the road and stop. In other words I park the car. I don’t believe I let the car sit for more than a couple of minutes but I wondering if other people do this and that is what we are seeing.

I checked with a friend of mine. He agrees it should be

This grumpy old Italian farmer should hop on his classic 1961 Lamborghini Tractor (they exised, look it up) and join us. The mechanic lady will have it going 150 mph in no time, and I’m sure it’ll qualify as an “extreme offroad”.

Maybe “cult classic”. Either way, he’ll forget all about his stupid grapes. I was only showing him how I make “Vino Automobili” at home…