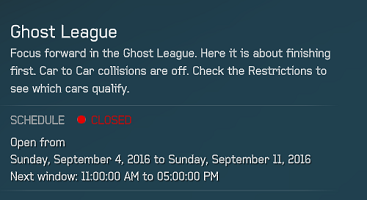 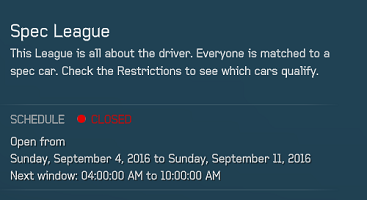 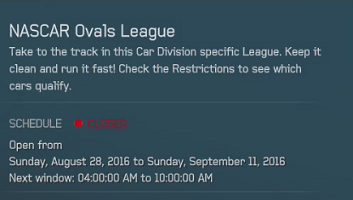 Which R cars aren’t allowed? Usually 70’s Grand Prix cars are forbidden since they will completely dominate. It would really ruin the variety of cars to use. Same as R hopper? Good to see a rare any R class ghost league. Thank you so much. Great that this is in before H3 comes out. Please add Monza and Le Mans Full tracks to the rotation. If it is the same as the previous 2 any R leagues I am positive they are missing from the rotation since I have that one written down. Better yet give us a new rotation that would really make this special. Either way I can’t wait till Sunday

All the cars and classes that are available ! plus what happened to the quick stops and more laps.

It’s looking like Turn 10 can’t be bothered any more-shame.

can the bentley be tuned?

can the bentley be tuned?

Are there any actual race fans at T10? Due to the lack of imagination in making these leagues, as far as I can tell they are only game developers with no real interest in motorsport.

I reckon they’ve handed leagues over to some junior PM who is just copy/pasting restrictions from previous weeks.

I’ve added plenty of new options to the Request thread, hopefully turn 10 can give the ideas a look. I desperately want to race something new and exciting! And I truly miss having the option of driving more than 1 car even if it means we don’t have as even of a playing field as a spec league.

Thank you so much

Update: the track rotation is screwed again. Top gear has no pit stop, I think I have done this rotation before and catalunya school was in that rotation wich also has no pit

R ghost rotation has actually changed form the past. Monza and Le Mans have been added and the rest seems to be reworked. Great job on changing things up. You made my week. Thank you

yup long overdue, although attendance seemed light compared to S. I find it strange race cars in racing game aren’t as popular. S was good but we always do S. Most likely this R will be my last league before H3 but who knows something might pull my attention once in a while.

It will probably happen tomorrow. Holiday in America.

Yes, and also besides it not having a pitlane, the end of race timer never shows up, so unless you quit you’re doomed
to go around Top Gear for the rest of your life.

Apparently the atom is not able to be raced with in R ghost. That’s a bummer. It’s not really that fun in S class.

and terrible in R class anyway but hey you can use a Nascar. Next time I see a Bathurst I might try it, maybe ok there

The McLaren M8B feels like cheating. At least it’s moderately difficult to drive.