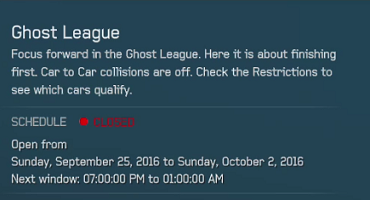 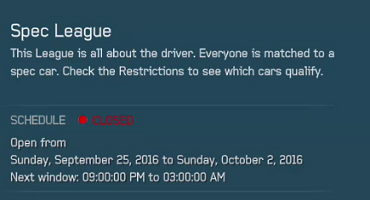 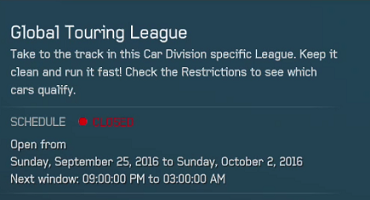 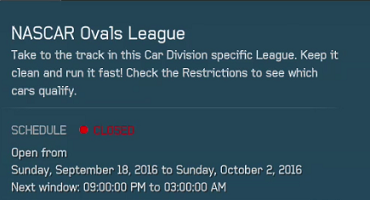 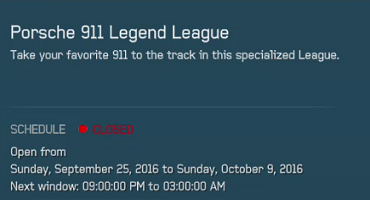 Really enjoyed the bump from 2 to 3 league modes last week and happy to see it again for the week ahead. Thanks Turn 10!

That said, it’d be best to call out any bugs/issues early on. Guess I’ll start…

Spec League: First one I’ve spotted so far today is a poor track rotation. In particular, 8 laps + 1 Quickstop around Nordschleife — no chance that could be cut down by, oh I dunno, by 5 or 6 laps? Confident I’m not alone in thinking that’s a tad too lengthy.

Can’t argue with that.

Liking the Modrrn Touring though. Can’t help think there’s LOTS of other cars that could be chosen for Spec leagues though. Imagine a lobby full of Metro 6R4’s lol

I do feel the game as been let go of now, Race Marshalls - nice idea but all seem awol. No robust way of reporting crashers, so that’s on the increase, repeats of car’s and division’s used in previous leagues as mentioned above and the whole state of the gameplay full stop with tracks repeating, races taking an age to load, horrendous lag and complete fails to load full stop.

I must say that leagues is the main reason why i play forza, besides racing against friends.
That said, and on a personal node, my whole week was bumbed, because i now have been advanced to a harder division, and therefore at the back of the field again…
Will pick up the fight though, once i’ve picked up my self

(and maybe wait for a slower class to show show up)

hey guys, usually I dont post a lot in this forum, just one quick question: Since FH3 is releasing tomorrow and will provide a new plattform for all those fast and the furious kind of racers, do you think playing online in FM6 will be more enjoyable again?! Just would like to get your opinions, since Im considering buying the xbox live gold membership 12 month pass…Thanks to you all in advance

hey guys, usually I dont post a lot in this forum, just one quick question: Since FH3 is releasing tomorrow and will provide a new plattform for all those fast and the furious kind of racers, do you think playing online in FM6 will be more enjoyable again?! Just would like to get your opinions, since Im considering buying the xbox live gold membership 12 month pass…Thanks to you all in advance

It’s fun now imo. Leagues are usually much cleaner than regular hoppers. And then there are always an option in leagues for ghost racing to take a break from some of the mayhem. P998 league is a lot of fun this week and allows me to race in cars that are much fasterthan my skill without having to worry about running over someone.

@theSNaiL46: Thanks for your feedback. Guess only time will tell if racing gets more cleaner in the leagues. Think Im gonna give a try; still pretty fascinated by the game in general…

Leagues have been really good lately. Don’t know if someone new is running them but they are better than ever. Ghost rotations have been adjusted. I am seeing a lot less Yas Marina which is good although I use it now to get a good starting position in the next race while idiots cut every corner. There has been a good mix of classes and with P this week I have to divide my time between H3 and Forza 6. Keep it up. Xmas has come early.

From the pinnacle lobby just now in touring car league, never seen this happen before.

From the pinnacle lobby just now in touring car league, never seen this happen before.

I got the achievement for exceeding 250 mph though.

Several friends have posted similar clips over the past week or so.

Yep same thing happened to me on Saturday night. I checked my exhaust system for leaks and then quit the race .lol

I want to thank T10 for the Ghost Leagues.

Because every time I try to run in the Spec leagues with more than 4 or 5 drivers it goes like this. My 1st race in the R Spec league tonight for a 12 lapper with 14 cars I start from the back and usually miss all the carnage at turn 1 and go on to a fun race as long as the screw-ups don’t try to ram me as they scramble to make up lost places. Then after running my clean laps I am put up front in the 4th spot on the starting grid at Lime Rock and sure as the sun will rise in the morning I’m used as brake fodder on the 1st turn. Without the Ghost League, this online game would have lost my interest long ago. I’m hoping as someone else has said in this thread that the 4 yr. olds or morons (take your pick) will go hunting over on FH3.

It doesn’t matter what lobby i’m in or if I start on pole or in the back there is a 9/10 chance I will be taken out by someone in t1 or get involved in a crash due to no fault of my own. Hopefully the majority of the bad players go to Horizon 3 today and stay there.

I’m a huge fan of the league play on forza 6 and its about the only thing i play these days.
Some weeks are better/more fun then others but thats just part of the game, sometimes we get to drive cars you would not drive otherwise.

Though i think there is some room for improvement.

The thing that botters me is the track list of each league and the balance of laps / quickstops.

In the E class league sometimes you get to drive more laps on the same track then you have to drive in the Radical spec league.
Also in the Radical league you keep getting short versions of tracks and we driving tracks like limerock, Prague short, Yas marina and COA all short.
I think circuits like that are perfectly fine for the E class league but it would be great to see the Full circuits for the fast Radical cars. Tracks like spa frankorchamps , Monza (full) silverstone (full) etc would be perfect for those cars but i only see the small tracks unfortunatly.

besides that there are few other small things that could be improved.

let me know what you guys think of it,

see ya at the tracks,