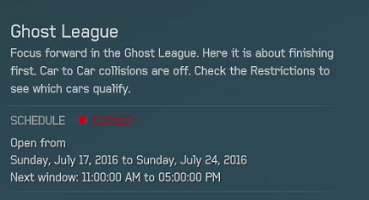 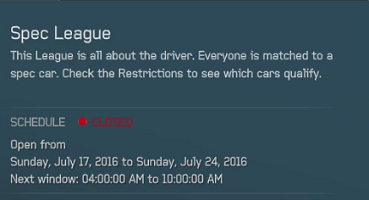 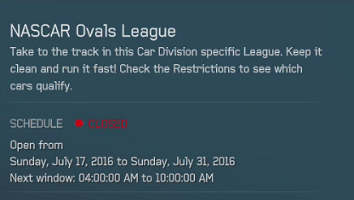 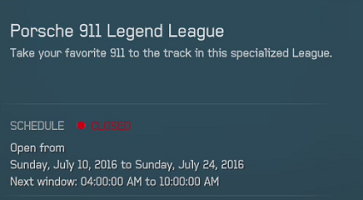 Odd that the ghost league is also stock only.

Odd that the ghost league is also stock only.

Stock only is wicked. Keeps us all close together. Great fun. (as long as you don’t get stuck at the back with the loonies)

I started using a second account a month ago, just so I could race in Elite again. I have found it has the best racing. I raced in Grassroots that first weekend, but not for very long as my internet went down for 2 weeks. Get back on this week with my second profile, and had a very good time racing the Hot Hatch Ghost League. Running in the top 5 in almost every race. I ran 10 races at most with the 2nd profile, exited because of the break, and boom. The damn thing slung my 2nd profile into Pinnacle.

The League Division Structure needs tweaking, big time. There isn’t enough players racing at any given time to want to race in Pinnacle. And it’s competitive for me as some guys are faster. And that’s good as it makes me have to drive different to make up that lost time, which makes me a better driver. And that’s what it’s all about for me. When I can’t do it because of the lack of players playing, it makes me mad.

I guess it’s on to a third profile for Leagues. If I get slung up into Pinnacle in 3 weeks time with it, then I’m done with leagues all together. There is no point in trying to race in Leagues when there aren’t any other players playing. I can’t even race with most of my Forza friends on my main profile since they’re all in Elite. And I’ve done everything I can think of to derank myself. Nothing has worked.

Pinnacle was dead this week through a combination of the spec league being broken for the 1st half of it, and the introduction of the Modern GT hopper. It had full lobbies in most sessions for weeks before that though.

I can’t see what T10 could do to encourage participation at this stage other than to adjust the numbers to promote the top half of elite, but doing that risks diluting the point of having ranked leagues in the first place. The last time T10 tried this the standard of racing dropped so much that previous regulars quit playing it, and there’s already a pretty wide skills gap between the front and back of the pack.

Never really been a painter, but I shared a livery for this week if anyone is interested. 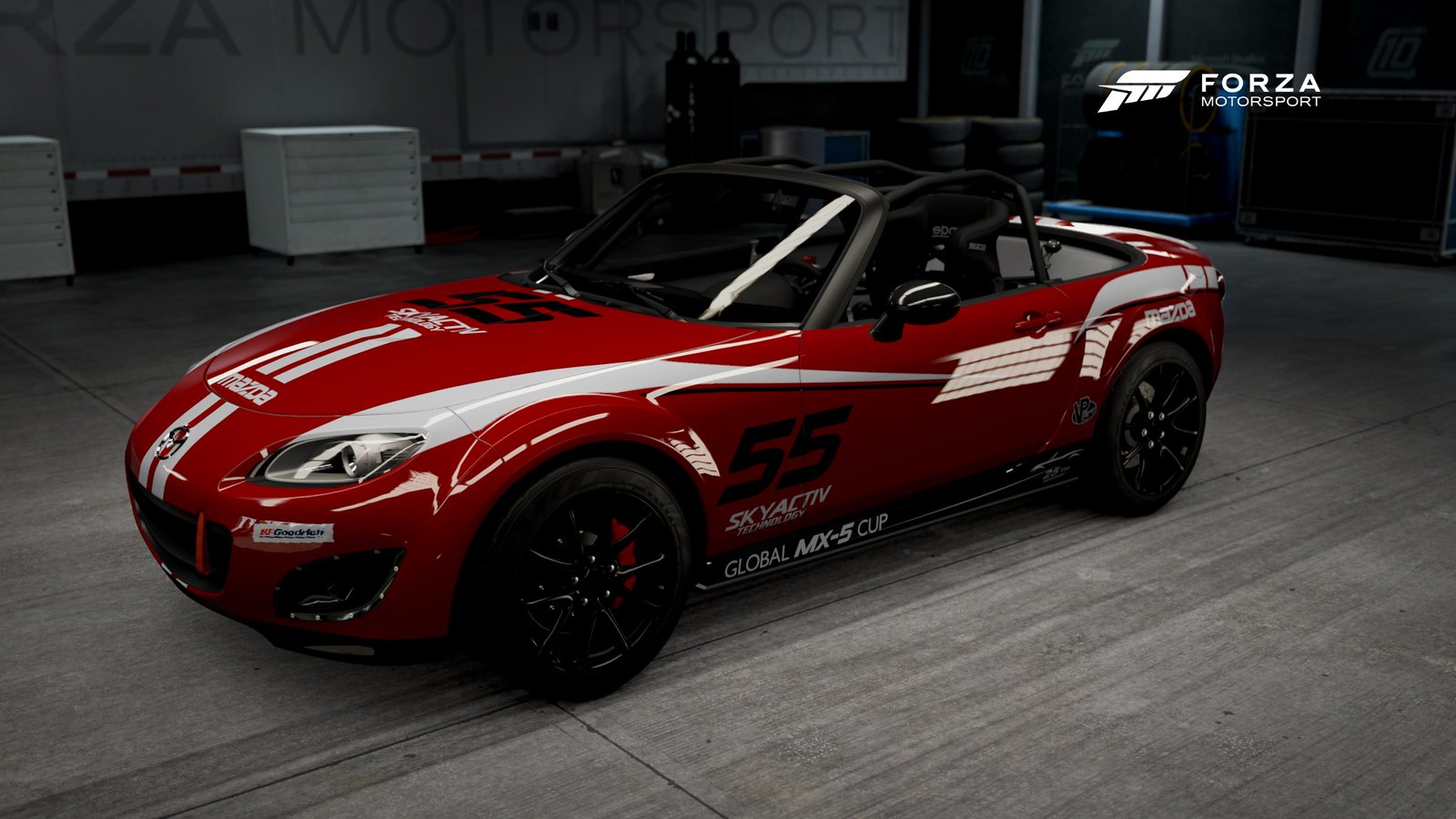 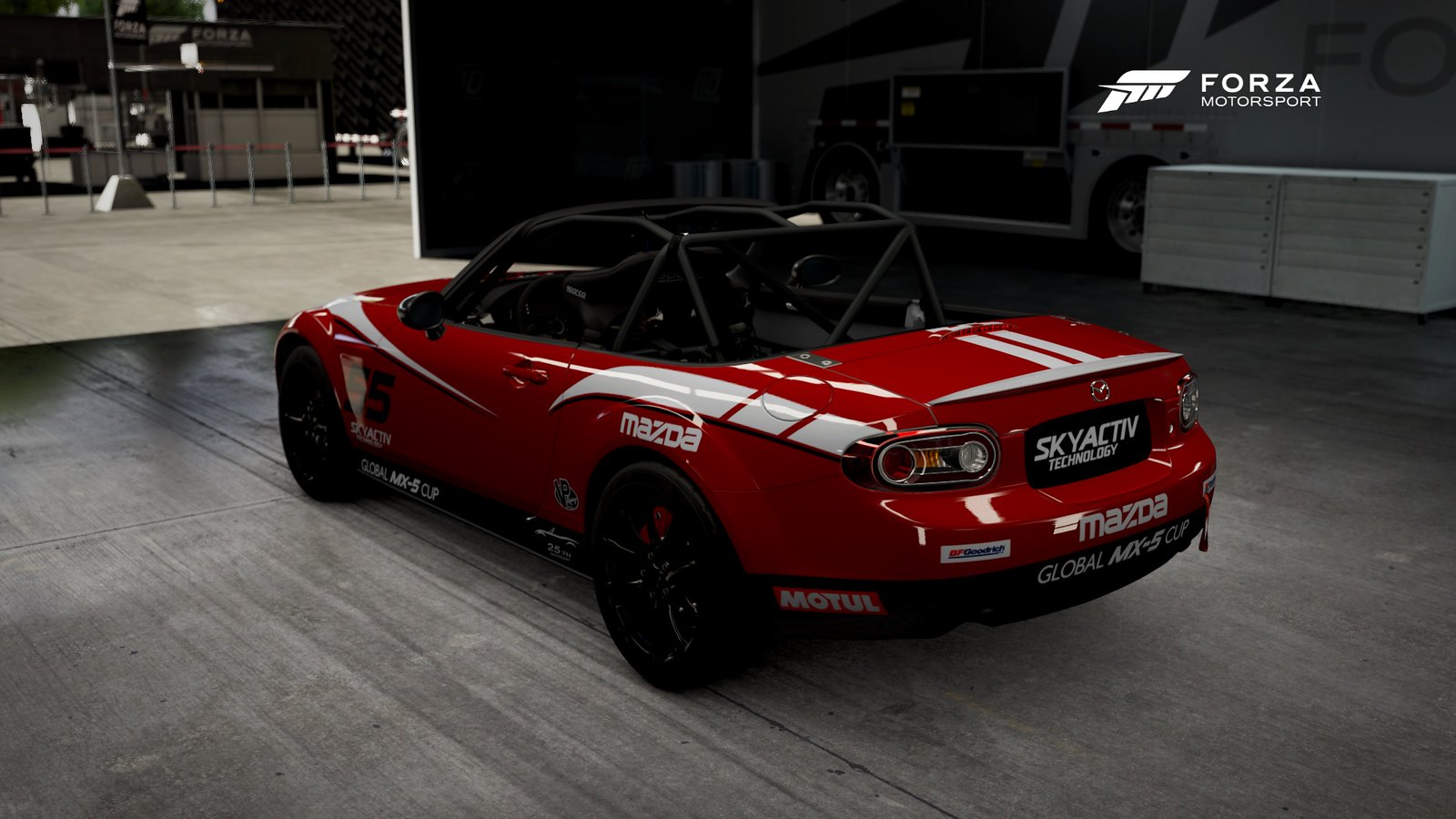 Never really been a painter, but I shared a livery for this week if anyone is interested.

I don’t know if you have time, so no worries if you don’t. But if you made one in dark blue, or like cobra blue. Id defo pick one up to use as i imagine ill be in this lobby alot.

why is there a rolling start in a ghost league???

Had a quick go in the MX5 league.

There shouldn’t be pit stops in a league whose only USP is close racing. And there should never, ever be pitstops in 2-lap races.

Plus, what the hell is going on with the rear-view mirror in cockpit? It’s 4* zoomed or something. Seems totally broken.

I might give it another go, but it was a pretty grim 1st impression.

I’m curious to when you guys are shiftng the mx 5. At the lights? At 7 k? Or at the Red

I’m curious to when you guys are shiftng the mx 5. At the lights? At 6 k? Or at the Red

I’m curious to when you guys are shiftng the mx 5. At the lights? At 6 k? Or at the Red

Cool. I find the ratios is this car odd. 1st is shory compared to 2nd. 6th is too long from 5th.

Fantastic racing in the MX5 league today imo. All seemed pretty clean, and Fangio, FV Zay and I had some fantastic races for the win. It seemed like a lot of drivers struggled with the oversteer, but I think the times will become closer as the week goes on. I like the Quickstop, it allows you to pass some drivers with very wide cars without being forceful. I just wish we had some longer tracks like Daytona and Road America so there was a draft that kept the field close.

First whoopsy of the week - Catalunya School Circuit has no pits so wont work with Quickstops.

First whoopsy of the week - Catalunya School Circuit has no pits so wont work with Quickstops.

I’ve just done this track and there is no pit lane lol. Finished 2nd, everyone DNF’d and end up being put in 9th ! Needs taking out of the rotation.

I am in love with this MX5 lobby. It has not disappointed and great racing all night. Shame about the first corner incidents at the start of 50% of races.

guy who sets up the leagues, pay attention to what you are doing!!!, Mistakes every week

guy who sets up the leagues, pay attention to what you are doing!!!, Mistakes every week