right below here is an image of the car(sorry that there’s only one picture because the race was fast and we’re in Online Co-Op and there’s no photo mode.

it appears to be a all matte with opaque windows 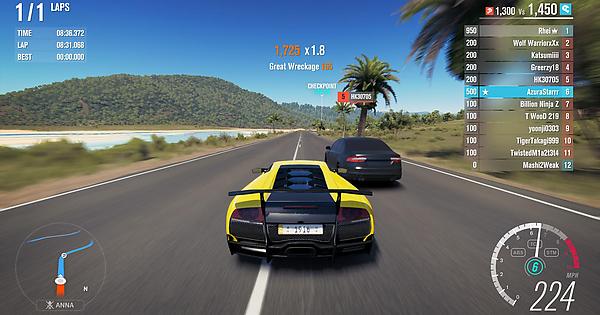 The body is of a Jaguar XE, but as we know with Forza Horizon 1, they had the M3 as the “null” car that meant you couldn’t see what they were driving although that feature is gone, you can see other dlc cars now, but because that car is technically not in the game yet I guess they have a very rare Null car that you see. Good find! I’m going to guess that the Jaguar XE will be in a pack sometime soon, maybe this tuesday.

It’s definitely the null car. For those who don’t already know, this is a placeholder car that is displayed if you don’t have a particular DLC installed. In previous Forza games it was usually a black VW Bora, but I guess that is gone along with all the other VWs now.

It’s not an XE, though. The tail lights and exhausts are definitely wrong. It actually appears to be the Falcon (FG X) XR8.

That definitely is a Ford Falcon XR8. Looks kinda cool to be honest.

I saw this car yesterday too. It’s the Ford Falcon XR8 and it was listen as “DLC CAR” in the results. So this car is a kind of the “NULLCAR” which we already have had in older Forza titels. Until FM4 the NULLCAR was a VW Bora, since FH1 it was a BMW M3 E92 and they are there as a placeholder for cars which are already in the game, but without a 3D-model = DLC cars.

The LI in FH3 was S2 966 for the NULLCAR so I think it will be a placeholder for the Bentley GT3 which we can win in the new ForzaRC Season2. And I think it will get the right name and 3D-model with the update next tuesday. (only speculation)

You could of asked them what car they were driving.

I thought that cars were shown and the need for null car disappeared with everything except Porsche where a specific dlc and license specific.