My question is if you were going to attempt to race all 3 of these in Forza Land. Which tracks would you substitute for Monaco and Charlotte not being in the game?

I would I guess have to go with one of the longer Rio courses to replace Monaco only because of the elevation changes and the narrow confines that come with most street courses. For a Charlotte replacement I would probably go with Miami because it seems to play more like Charlotte would than Daytona because you have to let off a little bit to get around d the corners. Even though Charlotte is shaped more like Daytona I would think it would be lot easier and faster to run 240 laps there. Than it would be to race 400 laps at Homestead like they do at Charlotte for the 600. To do all of these in one day would be a very difficult task to do in one day that is for sure. And I guess it wouldn’t really matter which order you did them in too.

I know some folks have done the 24 Hours of LeMans before in Forza and that is a crazy feat all in itself. But, this one would be a tough one too due to 3 very different cars and tracks not to mention the time it would take to do this.

So what tracks would you replace these iconic tracks with? And what order would do them in?

Plus the 24-hours of Nurburgring this weekend.

I don’t want any replacements. I’m fine with the tracks we have.

You forgot the the 24 h of the nürburgring

This weekend is my Christmas! I noticed people mention the 24 Hours Nürburgring, but failed to mention WTCC racing on Saturday.

Oh, I did forget the 24 hours at The Ring. Sadly this race does not get any TV coverage in The States. If it is shown it’s tape delayed and even then it is a hour show with 15 minutes of commercials and it is shown at 2 A.M. a month later.

I did check one of my favorite websites (tvracer.com) and sure enough it is not there. It is great though here in the States because on the east coast you get Monaco at 7 AM, Indy at noon, & Coke 600 at 7PM it is great.

There have been a few years when we did the 1100 where a bunch of my friends would start drinking beer at the beginning of the Indy 500 and keep going through to the Coke 600. It is a test of endurance too. I think I finished once out of 3 attempts. No winners because on Monday I felt like a real loser.

Fostbitten,here the livestream of the 24 hours… for free…

blessed to be a local ;o)

Out of some reason vodafone isnt streaming his year,the link above is the last years one… It has been announce on the same website you can get the actual too,but seems it doesnt work… sorry!

I’d rather watch gt and touring cars any day. But agree, what a weekend! I would like to see Monaco in the game but understand there’s license issues. Not familiar with charlotte (sorry, UK based). But I am impressed with NASCAR, I saw it last year at Brands hatch. Of the five events which would you choose to see if you could only choose one?

I’d rather watch gt and touring cars any day. But agree, what a weekend! I would like to see Monaco in the game but understand there’s license issues. Not familiar with charlotte (sorry, UK based). But I am impressed with NASCAR, I saw it last year at Brands hatch. Of the five events which would you choose to see if you could only choose one?

24 hrs at Nurburgring for sure,the party starts one week before and ends one week after,thousands of campers celebrate fast cars and themselves the whole days,beer,bratwurst and petroltalk all around the ring,its like mekka for the muslims… a MUST-SEE for a motorsports fanatic.

In 1 hour you can check out the stream: 24 hours CLASSIC race starts at 4.15 CET today

I keep this open all weekend during the Rings 24h

I’d say a good replacement for Monaco is Long Beach, if you wanted to do something to mark the f1 race. Long beach fits the street circuit category, tight and twisty with little to no runoff.

I’d say a good replacement for Monaco is Long Beach, if you wanted to do something to mark the f1 race. Long beach fits the street circuit category, tight and twisty with little to no runoff.

Yeah Long Beach is a excellent Circuit with a great history of great races too.

I really don’t like Monaco much. It was a great race, the one race in the calendar, but nowadays it’s plain boring to watch. Unless there is an accident in Turn 1 the polesetter will win.
The cars today are not drivable in close proximity so they can’t overtake.
So I don’t even want it in Forza, I’d rather have Rally Positano from FM3 back. It’s some kind of a similar spirit but way better and way longer.

For the Germans, or thos who can get German TV. RTL Nitro is supposed to do a full 24 hours broadcasting. I hope it is only half as good as Eurosport’s LeMans coverage.

WRX at Lydden Hill this weekend as well. 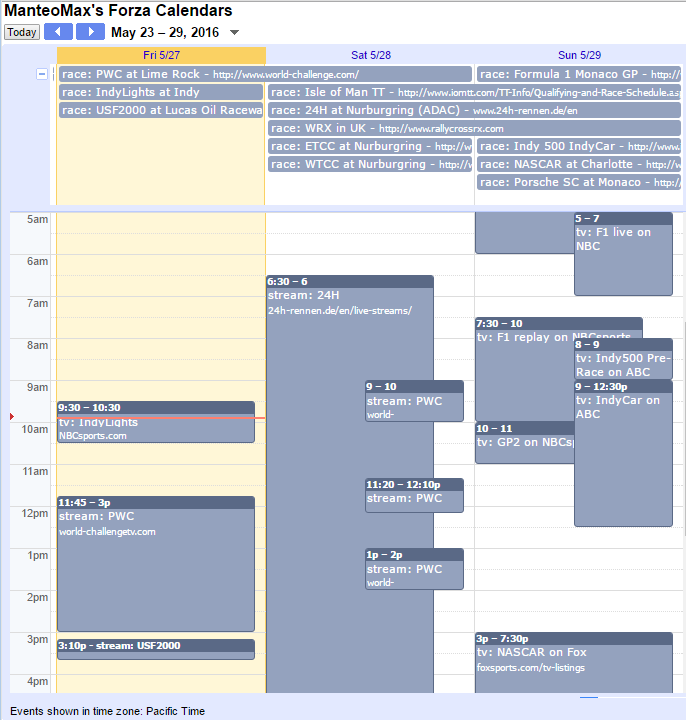 Cars this weekend? F that! It’s Isle of Man TT! BMW has their electric bike to school Victory’s entry. Bruce Anstey will be on an HRC kitted and Padgetts fettled Honda RC213V-S. I’ll down a pint or more in remembrance of Joey and the others, but it’s about the bike this weekend!

Good grief that Freedom 100 finish was close 0.0024!! That was crazy! About a half a front wing is all it was. So close!! I couldn’t tell who won it in real time what a race it was close all through the field too.

If modern F1 had a finish like that they would freak out!