How would you like post-release support to be handled for future Forza games?

I made a thread over at r/forza about post-release support in Forza games. I’d be interested to hear your guys opinion on this. Also wasn’t sure if this was the right place to post this. Either way, here goes. 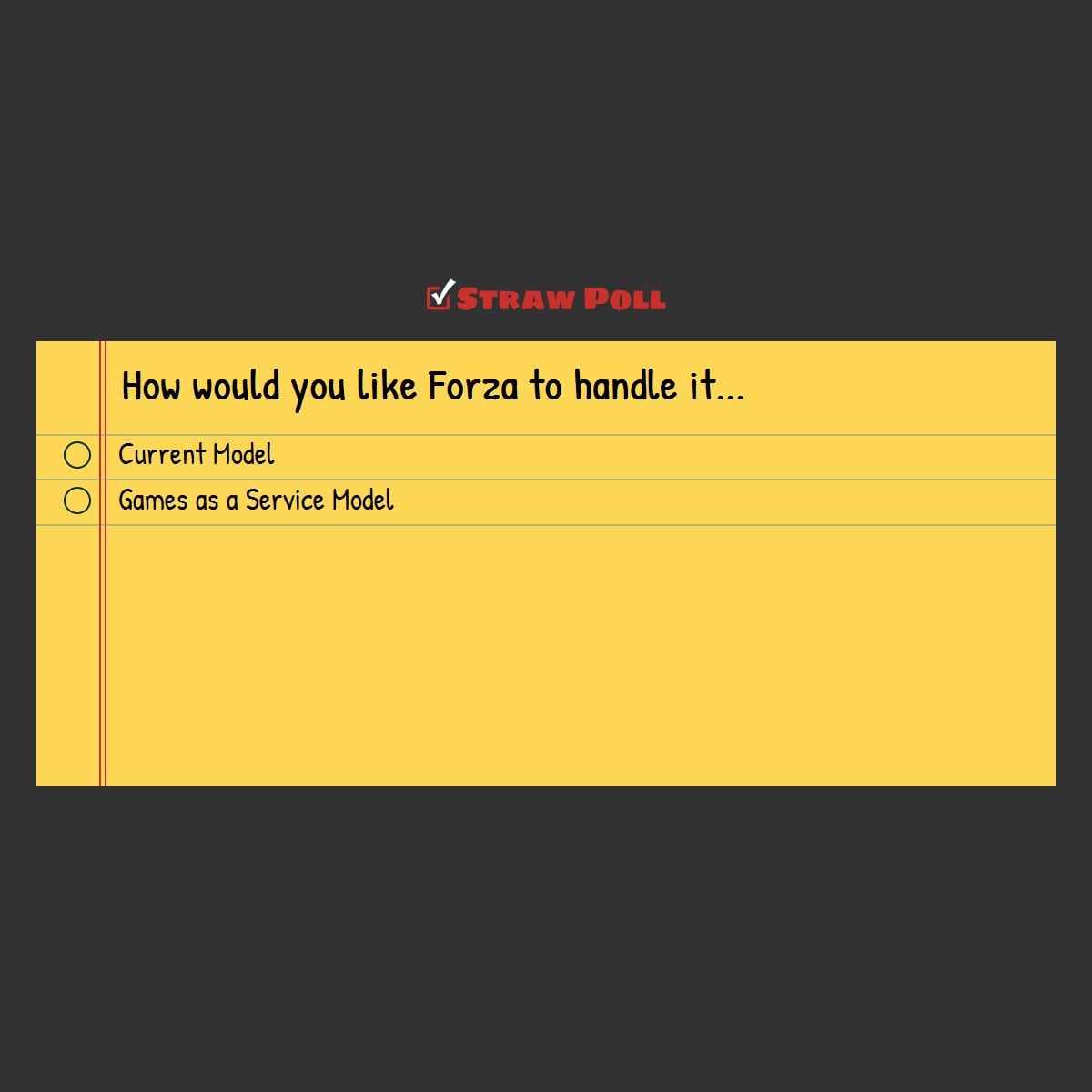 r/forza - How would you like post-release support to be handled for future...

Games as a Service.

It’s been a trend amongst AAA games for a few years now. We’ve seen how successful it can be, just look at GTA 5, Destiny, Overwatch etc etc. Recently Microsoft has been experimenting with there tent-pole franchises using this model, with Halo 5 & Gears of War 4. Forza has yet to make this transition, so this got me thinking about an interesting discussion point; What would you prefer? The post-launch model we currently have or a GaaS based model? And why? Also do you think it’ll change?

The way I see it, Forza’s current model is…

In-Game Economy: Very-Generous
DLC: Paid Car Packs for 10 months. First 6 months is car pass, last 4 aren’t.
Expansions: At least 2. Tracks would be a part of the expansions in Forza Motorsport (like FM6)
Microtransactions: Not in at launch, added in a couple months later. (Like FH2,Fh3,FM6)
Content Updates: A few medium sized updates in October-December period post launch with a couple of small features and a few bug fixes. Past this, support in terms of new features & bug fixes is almost non-existent (bar FM6’s Replay updates)
Length of Support: Support ends a month or two before the next game is ready to come out

With Forza as a GaaS, it could be like this…(rough approximation)

In-Game Economy: Stingy
DLC: “Free” Cars! (have to purchased with in-game currency like GTA’s expansions)
Expansions: Three or more (as the game is being supported for longer) . Tracks would be free in Forza Motorsport games.
Microtransactions: In at Launch
Content Updates: More frequent content updates with bigger features, more content and a more fixes (as a larger team is working on post-release content)
Length of Support: Support continues on past the usual 10 month mark, cars and expansions still release even after a new title has come out.

I made a poll about it too. Link: How would you like Forza to handle it... - Results - Straw Poll

Also, I’m not saying one model is objectively better than the other because this is a matter of subjectivity. I think both have there merits and both have there pitfalls (depends on the game, too), I was just interested to see what the community like would think about this topic.

Anyway please discuss, I’m interested to hear your opinions on this

I would prefer no change.

I much more prefer your “GaaS” way of operating. Keep the price of the game full and release free updates. Rake in money from virtual money that is not necessary but saves you from “working” in game. I’ve never been a gamer after technological advancements. Most of my favourite series are all behind the cutting edge.

I love what GTA V has done but l think it’s at a point where a new version should be built. Both the controls and its connection framework are clumsy.

Quickly tossing up new releases and throwing out the working foundations which you could play off of for years ruins franchises. Just as Need for Speed is in turmoil.

Even FH3, all of it could have been added into FH2. Instead they restarted and lost something in the process.

I despise the way Rockstar have gone about it. $400 per update to use the content if you cannot spend the time to grind for it, and actively attempt to block people from spawning them in in singleplayer to push them towards online and towards microtransactions.

I’d rather Forza stay the same as it is, bit with Passes that actually cover all the DLC. And if possible, an edition at launch that covers all the content.

I find the current in-game economy to be less than generous. If all the overpriced in the millions cars were dropped down to more reasonably attainable prices, it’d still be a merely adequate game economy at best. I certainly wouldn’t want to see it fall into Korean MMOG levels of stingy, tedious grind.

While I don’t hate the idea of a game as a service, items released later on in content updates can be a grind to earn if you don’t pay. This can also be a problem for someone who is new to the game after some time because most, if not all, of the items that are easy to afford are more often than not obselete. On the other hand, new updates bring new players in and encourage veteran players to stay.

Many free-to-play games follow this format, whether it’s on PC or phones. It is the main reason why I don’t play such games when I know how old the games are. I’m not the kind of person who is rich, be it in time or money, so those games are hard for me to keep up in.

I would say that Forza should stay in its current format. It’s easy for anyone to get into the game the way the game was set up. Players can buy the cars they want with no pressure of buying everything, although not everyone plays that way. Car packs are not a forced purchase. You do not have to buy the ultimate edition, although that early access was tempting.

Something to clarify is that Forza’s microtransactions are actually just accelerators, which simply let you save time accessing items you can get from gameplay without paying extra, as opposed to assets behind paywalls.

I like the Forza system as it is. It is easy to progress without buying anything. PI is easy enough to come by and the DLC is optional. I have no problems with the current system.