How to complete first off-road challenge with street car?

So I’m in the beginning hours of the game just completed the illicit race on moon-light and now I have to compete in a new off-road event.

The issues is that this event spawns me with the street car I have instead of the off-road one. Is this how it’s supposed to be? Because with my street car I barely make it to like 5 place.

It’s a long time since I started the game but I cannot recall any race which you are compelled to do in a particular car (or, in fact, any race you have to do at all).

If you have an offroad car which you want to use, try changing into that in your garage before you go to the event you are trying to race. The game should then give you race choices which are appropriate for that vehicle.

If you do not have a car which you think will work, carry on doing other events until you have earned some credits or unlocked an appropriate car through a wheel spin.

It’s called ambleside scramble and I can’t see the option to switch car. But thanks for the advice anyway - I guess I’ll search for a different event.

Ambleside scramble is dirt rather than cross country. From memory, I think I did it okay with the car I’d picked as the one to start the game with. If you’re new to the game you might need to practice it a bit to do it well. One tip is always try to pass through the checkpoint flag that is on the inside of the corner, to take the straightest line through the course, unless that will cause you to hit something like a fence or wall that will slow you down. The AI always take a more conservative line between the checkpoint flags, so there is always space to overtake them if you pass through the flag. To do the fastest lap times, it’s necessary to drive beyond the checkpoint flags, so you just touch them with the edge of the car, as this gives you the greatest potential to straighten out the course. Also note that you can adjust the AI difficulty in the settings.

Do you have to win the race or just complete it?

You should have Lancia, Subaru or Ford Escort as dirt cars, use one that you picked for first dirt race.
If AI drivers give you much problems, try lowering the difficulty of them in options before the race start, maybe turn on traction control if car is RWD, no need for it if its AWD. 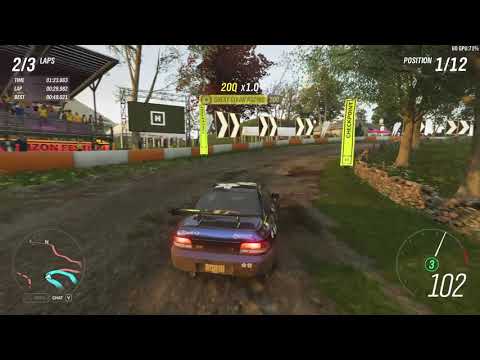 This is me having some fun in seasonal championship there (car is not stock), but tip for that race would be … don’t hit any roadside stuff and you should do just fine.

I think his point was that he is unable to select any car other than the one he is driving. My suspicion is that it’s probably because when he clicks on the event, it’s giving him an option appropriate for the car he is driving (let’s say A class modern sports cars), so the car he wants to use (for example, an A class modern rally car) isn’t then an option when he gets to the car select screen.

If I’m right, the easiest way to resolve it is to change car before entering the event. Alternatively, you could create a blueprint which does have the characteristics of the car you want to use.

I’m even more lost - nothing works for me. I’ll probably report a bug or something.

Just checked this. My very first car was an Audi TT. If I select that and go to Ambleside Scramble:

The race it auto selects for me is “Modern Sports Cars” - as that’s the car type for the Audi TT. On my screen, I have an option to “Change Car” right next to that choice. If I then select a Lancer Delta S4, I instead am given a “Retro Rally” event - which the Lancer can do.

It’s really annoying but you can do it. You have to drive all the way back to the festival site and you can switch between your street car and dirt car there. I think it must have just been an oversight on their behalf before you make it to Autumn season, when the option becomes available in your start menu.

Is this the race against motorcyclists? If it is I recall that you’re forced into using a particular car. I don’t think that you have to win the race though. I only 2nd was the highest I ever managed, even when repeated.