just jumped in on the games with gold free play weekend. im primarily a single player guy. a quick google of the game throws up this term “homologation” a lot. it also would appear many are not fans of the system. from what i can gather, it is the game “normalising” all the cars in the pack to promote closer racing. to me, someone who is a passing forza player, this seems like a good thing. i appreciate motorsport and horizon are not the same bag, but isnt this what was already happening in horizon 2/3? i have had a quick nosy at the free play options and there seems to be a good few to play with so thats good. and the layout in general is clean. and in my first quick “jump in and throw a car around” it felt like forza usually does. solid enough, comfy, easy to understand what the car is doing. pretty much what i expected. my brief time in the menus already has me considering the jump from 6 to 7.

what im after if possible, is one of you vets, to explain in noobish, what is this homologation system, preferably in terms relating to previous motorsports and/or horizon. and if im right in that it is designed to “level the field” so to speak, why do some consider it a bad thing?

It is indeed a measure to group cars together and attempt to make each car competitive in its class under specific rules. Performance Index is limited and tire width, tyre type and engine power have a maximum in each division.

This is a great feature in many aspects but when the game launched, the XPSABCDE lobbies were not available in multiplayer limiting your car choices and car builds. This freedom has been a staple of Forza for some time and many long time players disliked it, myself included.

Now I feel the choice is there in multiplayer to do either, it’s great now

so it is like the “auto tune” of old then. the game decides on the best bits and does it for you. within previously mentioned restrictions of tyre and power etc. what about the single player aspects? does it limit the options in comparison to the other games or can i still build to my liking?

You can choose different performance parts within Homologation limits for horsepower and PI, which allows you to homologate the same car in different ways. Homologation applies to Career and some Rivals/multiplayer events, but is optional in Free Play. In Free Play you can upgrade your car in any way you choose if you don’t want to be limited by Homologation limits.

Here’s the original pre-launch introduction to Homologation, thread linked listing each cars by Division and each Division’s Homologation requirements:

Where homologation comes into play is when it’s time to go racing. In both the Forza Driver’s Cup single player campaign and in multiplayer events created by Turn 10, cars will be homologated to certain performance standards based on their division. These divisions can be applied in Free Play and Private Lobbies as well. These homologation standards will be across several performance characteristics – tire compound, tire width, horsepower, and Performance Index (PI). In order for a particular car to compete in a homologated event, it will need to meet the performance standards inherent to that event. For example an event in the Exotic GT series might allow only “Sport” tire compounds with a maximum tire width of 355, a maximum of 750 horsepower, and a PI ceiling of 800. While cars can and will fall under those performance caps, any build that exceeds those numbers will not be eligible to compete. 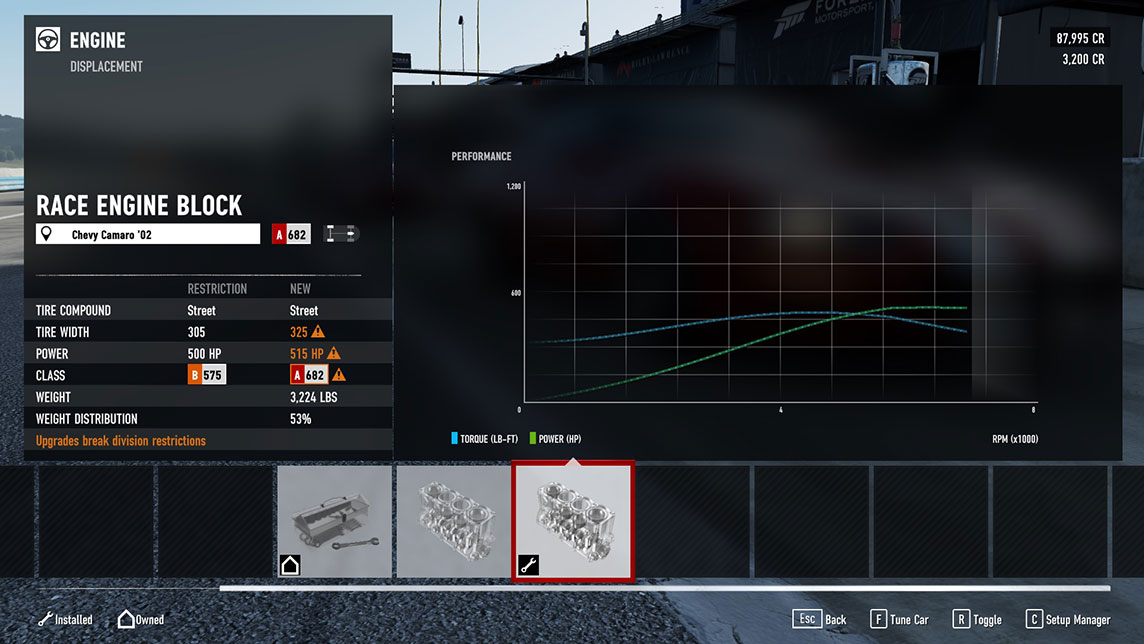 As an example illustrated by the screenshot above, I’ve been working on my 2002 Chevrolet Camaro 35th Anniversary Super Sport, a car that is classified in the “Sport Touring Icons” division. The homologation restrictions for racing within that division call for a Street tire compound, with tire width not to exceed 305. In addition, there’s a horsepower cap of 500hp and an overall PI ceiling of 575. As you can see, my current build exceeds these homologation standards in three different areas – tire width, horsepower, and overall PI. While I can continue to build this car as I like, in order to race this Camaro within its homologated division, I’ll need to lower the tire width and remove the Racing Engine Block too.

Now, for those who aren’t expert tuners, we’ve made things easy to make sure that any vehicle you use can be easily brought up to competition standards. The quickest method is our new “auto-homologate” feature. With just a press of a button you can quickly and easily bring a vehicle up to spec and able to compete in a particular event. Even better, all the homologation-necessary parts are automatically included in the price of the car at purchase, meaning you won’t need to spend extra credits to go racing in your new ride.

For players who want some finer control over how they bring their car to homologation standards, you’ll always have a clear understanding of what the homologation restrictions are for an event, thanks to a handy screen that displays the event restrictions and your car’s current settings. You’ll have flexibility to adjust your car upgrades and you’ll get immediate feedback if your performance crosses an event’s threshold.

It’s important to note that homologation does not mean that all homologated cars will behave in precisely the same way. After all, this is Forza, and each car in the game will still feel completely unique in the way our fans expect. This includes highly complex characteristics such as chassis flex, suspension architecture, wheel-base, and moment of inertia. Indeed, certain cars within homologated events will be better for specific tracks (for example, think of speed tracks like Daytona and Indianapolis Motor Speedway, where horsepower will be king). Homologation means that players will be able to have more cars to choose from within each division they play in. Instead of having a handful of “go-to” cars per class, now players are encouraged to build a garage full of event-specific rides just waiting for their turn on the track.

The introduction of homologation in Forza Motorsport 7 is an important evolution to our racing standards in Forza, and a feature that we believe all players will benefit from, regardless of their skill level and experience.

You can only build within the limits the game sets, you must have certain tires, a horsepower limit and a PI limit. For some cars there is plenty of room and others none at all.

As for my major complaint, it’s the combination of homologation AND division that really limits you. You have to race these 8 cars in this class - and no other way.

it would appear to be aimed at multiplayer and career mode. both of which are perfectly reasonable. in terms of multiplayer, according to the above, it applies to “official” turn 10 set ups.
im guessing when i have chance to tinker more with the free play single player options i will be able to build my (pulling this out of thin air) s999 mini cooper and race it against lambos.

@poohhead, as i say, im primarily a single player guy. are there no “free play” optionds in multiplayer. can you not build your own race and “rules be damned”?

In Free Play you can build and race whatever you want, the problem is getting your opponents to do what you want. If you race “whatever” then they do to.

Most of this can be fixed by putting the AI in to their own separate bucket and setting the restrictions so only the cars you want to race against will fit.

i think i can deal with these options. by the sounds of it the single player offering is quite substantial. thanks for the answers guys

Homologation didn’t create parity and also limited ability to race against other types of cars. For example, not all muscle cars are in the same homologation division and cannot be raced against each other.

As is there are dominate cars in each homologation division and this is primarily caused by a complete disregard of weight and the penalty some cars get for having better top end in their stock form. Basically the division specs don’t balance the cars.

The lack of creativity in building cars and the limited options in multiplayer at the time (less than a quarter of the divisions could be played online) in part fueled a lot of the hate. Homologation is a good idea but it wasn’t thought out well. T10 also gambled and lost on the idea of scraping class based racing.

There are class based leaderboards now, too, though.

There are class based leaderboards now, too, though.

Times from single player races and online racing doesn’t go there so they mean nothing to me.

with the system as it is, and i appreciate that i could work this out with menu tinkering but, for the sake of saving menu time and getting more driving time during this trial period, is there a way of making yourself last place on the grid. i gather its related to the buckets and such, but when i tried something there, the grid got filled up with faster cars, and i was still not at the back. obv got a setting wrong somewhere :). if someone has straight forward “press this button and then this button” instructions for putting me at the back of the grid, it would be greatly appreciated!

Try grid ordering by PI and then Ascending: Yes

Edit: You can also try Custom race which will give you 4 buckets to play with or Multiclass which gives you two mandatory buckets.