Can you please give some help on my racing

Any help will be greatly appreciated

The best way to improve your skill is through constant practice. I think that rewinding is not a good thing to do because if your planning to join MP in the future, that feature is not available there. Also ramming is VERY frowned upon in MP. If you’re still having trouble getting to 1st in the campaign, adjust the Drivatar level lower. When you’re winning without a problem, up the Drivatar level.

Increase the race distance, that way you can time your moves rather than having to force through. This will also help you get move familiar with every track you race hopefully benefiting you when you decide to enter multiplayer.

Rewinding is also a none option in multiplayer so it’s probably worth removing the feature to learn from your mistakes.

Getting first in all races is not required in career mode. Only participation counts. You will still receive all rewards and similar payouts no matter what position you finish in. The only factors that affect CR payouts are drivatar difficulty and race length. You will earn more CR finishing in 7th against pro drivatars than you will busting your way to first against new racer drivatars.

My advice is to put the drivatars on a level that makes them a little faster than you and fight cleanly to the highest position you can and battle for that position. If it’s first great, if it’s 4th that’s still good especially if you got there without causing accidents. You will quickly learn tracks and braking points and also race etiquette if you make a conscious effort to drive with some manners.

I’m not trying to sound stand-off-ish or aggressive but always coming in first has no tangible reward associated with it. All of the prizes are attainable purely for participating.

Good advice. Turning down the difficulty may be your first step, depending on where you are at the moment. And I used to feel the same, as if I just couldn’t finish well being forced into the middle of the pack on EVERY start, unless I forced aggressively through the turn 1 pile-up. I felt if I couldn’t get to around 6th out of turn 1, the front leaders would just be too far out to catch.

But that was also earlier in the game when the AI would just pile up on their own. With various updates, they generally go through turn 1 pretty good if I don’t interfere and hold my position (like one would do in real life). Avoiding (creating) the pile up, moving up becomes much more approachable, and the leaders actually don’t get as far out ahead of the pack that way. I also prefer to us “limit aggression” off now, where earlier it was almost unbearable without turning on limit-aggression.

The other thing to do, if you want a more challenging AI that takes time and skill to overtake, is go into Assists (no idea why) and set race length to long or extra long. That gives you the time to catch those front runners.

When I first got confident enough to set maximum difficulty, I really struggled getting to the podium (and thus progressing career mode) without forcing turn 1. Longer races helped a lot, and took the turn 1 pressure off. It still took everything I had, but it became doable without forcing through turn 1.

But I just couldn’t fully shake that feeling I needed the early race push until I watched a video of the FACR guy (forget his name/tag) beating “unbeatable” starting at the back (Rio I think?). He’s obviously very good and well beyond me, but it didn’t take every curve perfect or aggressive overtakes and dives to get it done in (IIRC 10 laps?), and that was starting from the back! So I took a breath and tried approaching it from that FACR (the phrase the acronym comes from) attitude. Everything became much easier and more fun immediately. And since that point I haven’t played a great deal, but I’ve still improved enough that I’m having to shorten my races to keep it challenging. Otherwise, I spend the last half of extra long races just hot lapping to finish up. So now I’m usually running with “long”, though I’ve been on the podium with short (and their equivalents in free play).

Dont worry about what place you finish in, no one but you knows or cares. You can always rerun the race later if you want win all the races. Just think of replaying races as just another way to earn more credits to get more cars rather than as a chore that has to be done.

Go into Rivals mode and practive getting better lap times, then when you are racing, focus on good passing and overtaking and let results just happen. If you come in 2nd or 8th or last it’s no big deal so long as you are learning along the way.

Everyone likes to win but you will win much more by focusing on the fundamentals rather than creating a lot of bad habits like dive bombing, late breaking, throttle mashing, smashing your way through or cutting corners just to win.

Practice each track till you know every corner, every breaking point and where to hit each apex. When you lap consistent times and do not need to glance at the mini map, you’re there.
Turn off as many driver aids as you’re comfortable with. I suggest start with traction control off. ABS off is probably most tricky.
And as said before, adjust difficulty to suit your current skill - you’ll soon be turning it up. Ramming won’t give you the skills you’re after.
Good luck.

Lots of good advice here. I’ll add a few things that helped me get better.

For me, the first thing I did to finally start improving was to … slow down. When I first started playing Forza I would drive way too fast and always end up off the road or crashing or losing traction and rewinding. I was too focused on trying to gain the lead at the start of the race. This is a really bad way to play especially if you want to compete in multiplayer.

Turn up the drivatar difficulty. At the lower difficulties the AI is just too slow to race against. They are so slow that it will affect your own driving because you’ll be trying to avoid their unrealistic behavior. I would say set it to at least above average or expert. Don’t worry about getting first, or even on the podium. Just finish the race clean, and at least hold your position. Before you know it you’ll be cleanly overtaking and moving up in the races. Once you start to podium, bump up the AI one notch.

Start with lower division cars. Sure driving the F1 and prototype cars is fun, but as a new racer those cars are going to be beyond your ability. Start with something easier to manage, something in class c or b maybe. The modern hot-hatch ghost MP lobby is a good place to start, so learn to dive the cars in that division against AI. Learn to beat the AI in the lower class cars, then move up to the high end race cars.

The hardest thing for me to learn was braking. A lot of this comes down to familiarity with the tracks, and each individual car. I just did a modern SUV league event the other day, and felt like I had to completely re-learn braking; oh my those things are heavy. If you aren’t familiar with a track, don’t try to overtake on the first lap. Instead, try to drive close behind the car in front of you and watch their tail lights: as soon as they start braking, you do too. The AI knows the correct braking zones, so you can learn from them. After you get comfortable, then you can start to push the braking zone to try for an overtake. The AI has corners that it is strong on, and corners where it is weak. Racing is about identifying those weaknesses and using it to overtake. As an example, at laguna seca the AI is terrible at turn 6. (http://www.onehotlap.com/2013/08/map-of-laguna-seca-with-track-geometry.html). Try to overtake them on the straight uphill coming out of turn 6; just be ready for the corkscrew.

I found that turning off the suggested line/braking line helped me improve. The braking zone is going to be different for every car, so it requires being familiar with the track and the capability of the car. I feel like the suggested line actually prevented me from learning either.

That’s my advice. And while I’m not great at the game, I am able to beat unbeatable AI on the longer race lengths. Just have patience, and above all else: drive clean.

Oh, and watch this video, lots of good real-world advice: 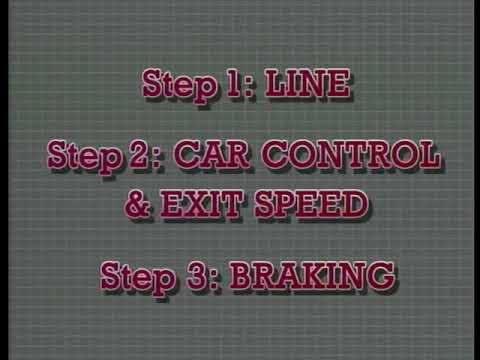 Lime Rock is one of the tracks in the game, so you can go see exactly what they are talking about in that video. The Lime Rock track also has cones placed a the turn-in, apex and track-out points, so it is a very nice track to learn to get faster on. Other courses (I’m looking at you Silverstone) can be harder to learn because there aren’t as many reference points.

While you’re still learning to drive well keep rewind on and use it. No matter how often, use it to learn each turn if necessary. Untill you’re coomfortable with
the deive. There are pointers in this thread far too hard core. Once you feel you’re ready turn rewinds off but till then there’s no shame in keeping in on.

Fully agree with turning the racing line off though. It won’t make you faster. Far too distracting. You’ll end up looking at it instead of ahead.

I am not fast but the thing that I am trying ti do is focus on racing the track and not the other cars. They are obstacles to go around. You cant control the other cars or what is going on around you. You can control how you navigate each track.