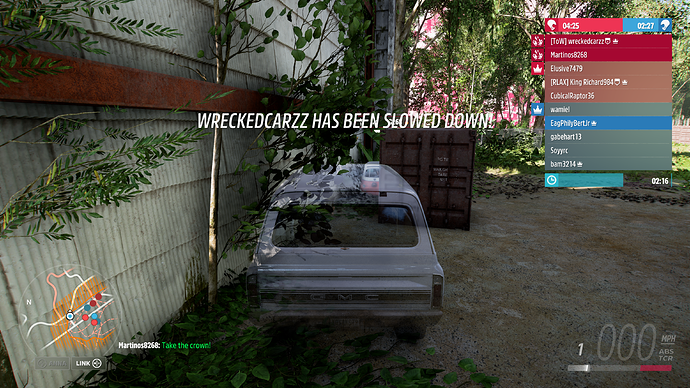 people have used the same method in previous games.

smart, but takes no skill.

Neither a glitch nor ca heat. If your car can fit somewhere other cars can’t and you manage to get a crown or not be infected, then all is good. The difficulty with that car is competing well in the other matches and actually getting the crown in Team King.

No. The pic is of a Peel hiding between a container and a wall. Seen that tactic several times. You get the crown or are healthy and hide so you don’t get your crown stolen or become infected.

What do you think he’s talking about if you are so sure that I’m wrong?

Sorry. I didn’t see the sarcasm tone in your font. Could you try to be a little more respectful. Calling someone DW isn’t appreciated here.

Hahahha some people on this forum crack me up

My first take was dimwit. Had a cousin who used that abbreviation to refer to someone he thought wasn’t too bright.

I think it’s a game error, which could be called a bug (although not accurate description of a bug). In the past history of games these sort of errors were fixed… until this team of programmers came along.

Its not a cheat, bug or error the peel is a small car that can fit in small spaces, its there for everyone to take advantage of, don’t be sore just because you didn’t think of it.

Sorry, but there are WAAAAY too many legit cheats and bugs in this game to concern yourself with a tiny car squeezing into a tiny space. I’m not usually “that guy”, but I guess today I am. This is neither a cheat or a bug.

Its not a cheat, bug or error the peel is a small car that can fit in small spaces, its there for everyone to take advantage of, don’t be sore just because you didn’t think of it.

Well it has always been classed as a glitch, or cheat in other games, I don’t see why Forza Horizon has to be different. Plus… I already explained that.

And don’t think it’s not a glitch that the car can fit in there as there are lots of hidden, invisible walls in FH that block you from entering places, because the devs don’t want you to go there.

I think we should agree to disagree.

In FH4 the castle and rail yard had areas for smaller cars to hide since the beginning of the game and hasn’t changed. FH4 also had an xp board that was only accessible by the Microcars so it would seem intentional.

That MW glitch is in no way no how comparable. You’re wrong. Can you admit it ?