Here is something that I really hope pans out, since I now actually have a gaming PC that could make Forza 6 look better than it does on X1. I know this is a rumor for now, but maybe people will find more and more clues in the coming weeks. 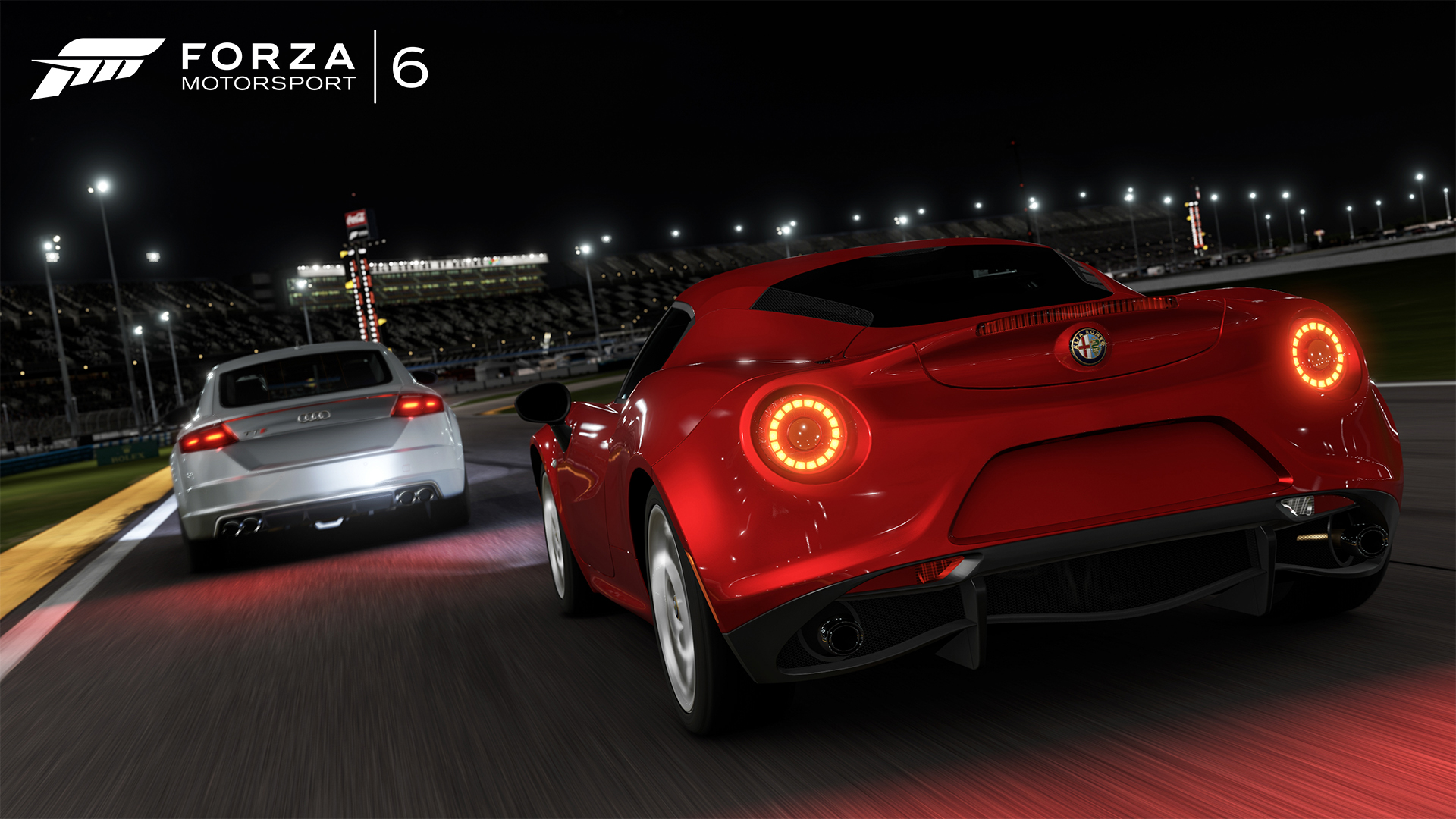 I hope it will stay just like it is - a rumour A new rumor claims that Microsoft is planning to release a special Windows 10 version of their Xbox One racing sim Forza Motorsport 6 exclusively via the Windows Store. It also mentions that Gears of War 4 might also be released for Windows 10 as...

That will be the end of Forza we all knew

I really personally like it better if Forza just stays on the XBOX Consoles.

I really personally like it better if Forza just stays on the XBOX Consoles.

I rather console games stay on consoles. I’m not a PC gamer, and I don’t want to game on PC. to make a turn to PC, would ultimately be more bad for Forza, than good like some pc gamers think.

I would love for this to be true.

why keep forza on xbox?

I expect it’s a bit late in the development cycle to port FM6 over to Windows anyhow. I would find the rumor more credible if they had mentioned FM7, but to include FH3 which hasn’t even been announced yet sounds cheeky and a bit far fetched to me.

I won’t be taking it too seriously.

It could provide more money for them to invest in future games.

I think technically this could be a problem for console owners in the long run. If a developer makes a game for both PC and Xbox One then it’s easy not to optimize the console version as well as they would do if it was their only priority. Multiplatform developers are much more efficient if they develop a game for PC and just port it to console. No matter which one. Forza games have always been the pinnacle of console optimization and technology just like Forza 6 is doing everything the Xbox One can and its performance is flawless. However, if Turn 10 is going to develop future Forza games on PC too, they might lose this edge and make more compromises on the console version in order to ship the game on time. I’m not worried about Forza 6 as it’s complete now (technologically speaking), but the future of the franchise could suffer from this on console. It’s a matter of which version they focus on and which will be “just a port”. Projects should remain focused on Xbox One and then ported over to PC. As soon as they begin to optimize for PC and use advanced technologies the console variant could suffer. Or at least that’s how I see it from the outside.

Marketing-wise I think it would be a tough sell for Microsoft but that’s their job. I don’t feel cheated or disappointed at all if Forza games come to the Windows Store. My laptop is unable to run Xbox One quality games so I stay on console no matter what.

My concern is simply with cross platform compatability between Windows and the X1 (the online gaming), I am worried about the PC players modding, since PC games are always far easier to mod than console games. It will happen as does with every PC game.

It doesn’t need to be cross platform though

There is nothing I have seen (within the officially unofficial rumours) that suggests the game will be cross platform online.

Only possible downside might be that some on the fence console gamers may decide to go just PC and therefore reducing lobby populations on the console.

Other than that I believe the game itself should gain from bigger investment.

Oh boy, I hope this isn’t true. Forza has always been an Xbox exclusive and honestly it better stays that way. Not that I have anything against PC gaming but it just doesn’t feel right.

If it happens it will only drive the community further apart and may also decrease sales of the Xbox One, not that the console is the best of current gen gaming to begin with. Just look at framerate comparission between the Xbox One and the PS4 for any multi-platform game. The difference is pretty obvious.

coming to PC will kill the Forza & xbox brand, then why will someone pick up an xbox?

I dont see how it will kill forza, imo this is the future. You’ll pay a game over xbox live on any device, console, PC, or other devices. The console will always remain because people will always want that easy option were you don’t have to worry about hardware or software setup. Xbox live and windows 10 will be the future of gaming for Microsoft and I think it’s a very good thing. It will benefit Microsoft, will benefit 1st party developers like t10 because they will be able to reach a broader audience other than just the xbox one.

If it does end up on PC, I’ll be concerned about how much focus and support Xbox versions get in the future. Turn 10 barely have the manpower to keep up with what the community does on Xbox as it is and something would have to give if they’re supporting 2 versions of a title.

Additionally, if there is crossplay with PC I’d be concerned about racing against PC players that have modded their game/physics.

Also, livery creation could change in a big way if we see Forza on PC, and unless the game is locked down hard (and becomes “unmoddable”) we’ll see a lot of texture swaps and such.

Obviously everything’s just speculation at the moment, but should these rumours come to fruition there are a lot of questions and concerns that I’d have about how things will work in the future.

T10 probably will remove the paint editor alltogether from a possible PC release if previous releases are any indication how hacking problems were solved.

With Windows 10 and directx 12 and the x86 architecture, the xbox one is as close to a PC as it’s ever been. Optimizing on the console will translate to the pc too. Assetto corsa made optimisation improvement on PC Wich was the result of developing for the consoles.

As for modding on the pc, that all depends on how secure the future services from Microsoft will be, as I’d dare say it would be an online service like steam, so verification checks should be the norm.

Painting in the livery editor should just stay the same imo, I don’t see why they would need to change it

Obviously this is all pure fantasy and speculation but I honestly think it will be a good thing. Maybe i’m just a little optimistic though, I can fully understand the concerns people have but Im thinking positive, I have been wanting forza on PC for a long time so maybe I’m a bit bias to the idea too

I think a lot of the xbox exclusive players are missing 1 big point. Right now they basically have cornered the market on xbox and are able to kind of get away with the get what you get mindset. There are some very good point Sims and racing games that I think the problem version would have a hard time contending with. Unless they plan on just going with a subscription based game like the other racing Sims I think they will fall behind too quickly because they don’t seem to like supporting their game as much as the other sims.

And the other bit of it is if I am on pc (I am) why would I play forza on it, there’s raceroom, race 07, game stock car extreme, rfactor, asseto corsa, iracing, project cars, amongst other smaller and budding games. The only think forward does better than any of those other games is has a bigger car selection. Do I wish some of the others had more cars? Yes, but not really the ones that are in forza. I don’t care about all these junk road cars, I’m playing a racing game I want mostly race cars. Every one of those other games has better ffb, and most have better physics and sounds and more tracks

If this rumor is true, it will be the best thing in gaming happened for a while for me. And I will instantly buy Forza Motorsport again. So please be true

PC is just missing this kind of game with a large selection of road cars you can customize.

They have issues fixing xbox only bugs. Can you imagine how long it would take them when there is PC bugs too?
Plus all the modding and cheating that infects PC games. I play PC for eye candy and single player, Xbox for online/exclusives. If Forza jumps to PC, i’ll dump my Xbox to be honest. I won’t need it. Online is a joke in Forza now, and most games that used to run split screen have stopped. So my Xbox goes unused for periods of time as it is, or my kids play on it while i’m enjoying my new Skylake build and all it can achieve. lol
These rumours circled a few years back and came to nothing too. It’s all just jumping on the bandwagon because of quantum break. It would be great for better eye candy, bad for community, but they’ve shown how little they care for their community these days. Mechberg and johniwanna do a great job of keeping us informed and educated. But the policy in general is radio silence. The PC market won’t stand for that and these boards will be carnage. lol
Only time will tell of course, but just because one game does it, from a company with past Xbox/PC titles doesn’t mean a previously Xbox only Dev will, although Microsoft could be pushing it to promote their One platform ethos with the windows storefront.