Just to add there are lots of reports already about it being bugged. Well done game. Well done.

Worked fine for me.

How did you get the treasure chest then

And i just want to point out that this is not the first time this problem occured. It happened to me during the winter season treasure hunt in series 4 and now this season in series 6.

I actually had hope that maybe PG would retroactively award me the missing points in series 4, like they did with the bugged treasure hunts in series 1 and 3 (…i think; correcty me if i am wrong). But i fear this issue here happens in such a random way, that PG probably won’t do the same. Would have been nice to have series 4 and 6 completed with max points, but i don’t even like the game enough to get really angry about it (and i love FH4 and really, really liked FH3)

x box one x, same for me, i had message on the screen that the chest should be there, but it does not show up on the map

How did I get the Treasure chest? I followed the walkthrough as per this video although I used a C class Toyota 86 with a tune applied: 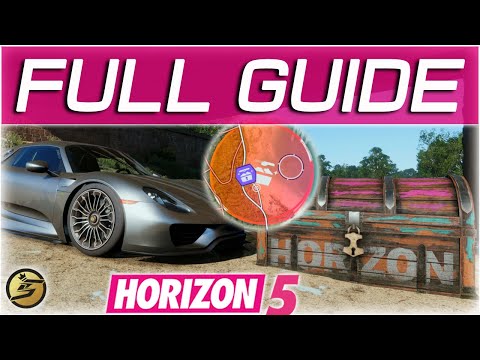 No treasure chest for me either.

We’re too far into the release of the game for advertised and encouraged features to not be working as intended.

On the same boat, no chest appears. Tried to delete scratch files, tried to replace packages files, no help.

Tried 5 or so different upgraded cars and road sprints and yeah, nothing spawning for me. Great.

My first attempt didn’t trigger anything, either. Luckily, restarting FH5 and running another race did.

I know that doesn’t work for everyone, but just a reminder to try that first.

Me too, use a lot of car with tuning and run all Spring, but Treasure Hunt message never appear.

I got the message, but no chest.

I don’t think I recall a Treasure Chest being this buggy before. At least it seems like a lot more chatter about it not working, or half working (message pops but no chest) like for me. I hope my friend has no issues later, well on their way to their first solid gold series for Min Meet Max. It would be just like FH5 to screw them with a buggy challenge.

It was the same situation in Series 1, but that time we could say it’s okay to be a bit buggy so early after game start (it’s not, though).

Anyway, it’s the same for me: message pops, no clue on map, chest not there. Just like in series 1.
Good bye 100% completion in 5 seasons* in a row.

I sympathize with all those who can’t complete the hunt, this week.

I’ve had it happen to me twice, and its very irritating… I feel your pain.

I was able to get this one, but I now go through this routine of every Thursday morning doing a fresh reset on xbox before I login to do any new content… worked for me last 2 or so hunts - but I can’t even offer it as a suggestion to people cause everyone seems to get a slightly different in game experience, which is ridiculous this far into games lifecycle.

Here is holding hope for you guys that are struggling, I wish luck for you all.

I got it to work by following the clues literally. I upgraded the 1992 Ford Escort RS Cosworth to B700 and won a Colossus solo race on an easy setting. The Cosworth and Horizon Apex sign are shown in the festival playlist. Colossus starts and ends at the Horizon Apex sign.