This is the second season of Series 32.

#FORZATHON SHOP (changes at 7:30am Pacific)

#MINICARMASSIVECASTLE - Take a photo of any Mini with Bamburgh Castle

Earn 100 FP from the weekly challenge plus 10 per Daily, plus Bonus for all, double for owning the Lake Lodge

Weekly Challenge: (15%)
Must be done in sequence to count.

Daily Challenges: (1% each)
Each challenge is open for 72 hours from 6:30am Pacific of the start day.

The unique reward listed for seasonal championship events requires you to place 1st against at or above the Highly Skilled Drivatar difficulty setting; the Trial requires Unbeatable difficulty. As of Series 24 Playground Games rewards the car for all participants, win or lose.

Completing the monthly events applies their completion percentage to all four seasons in the Festival Playlist:
6% for Monthly Rivals
15% for Online Adventure Qualifying 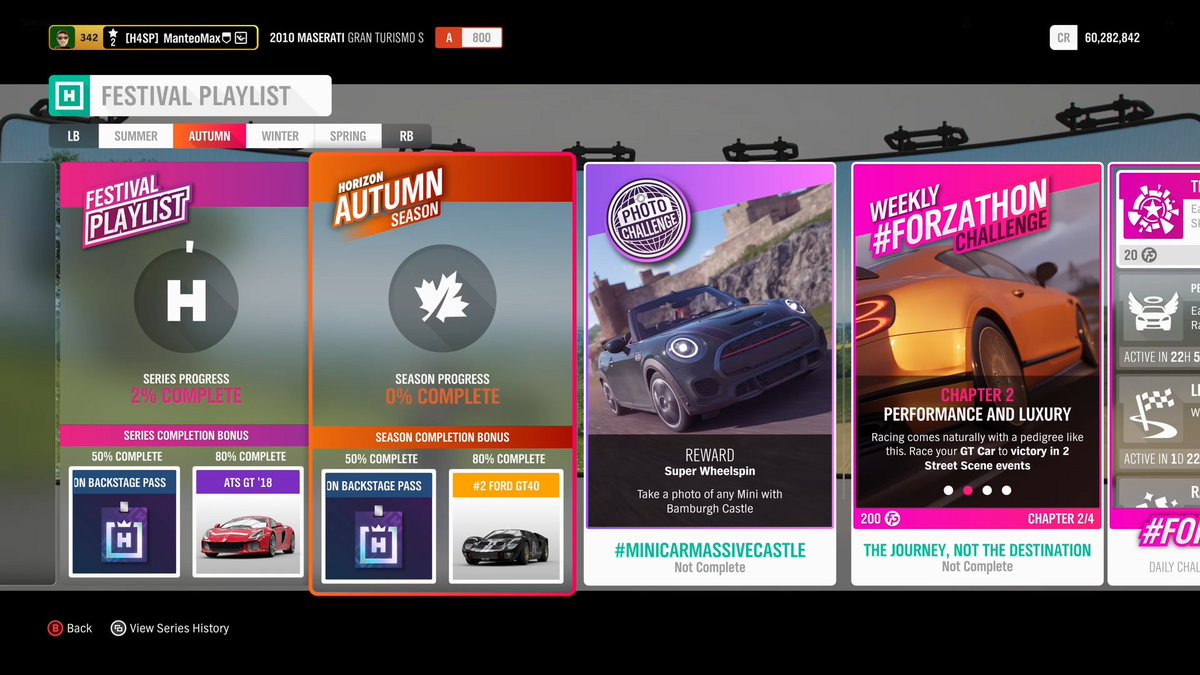 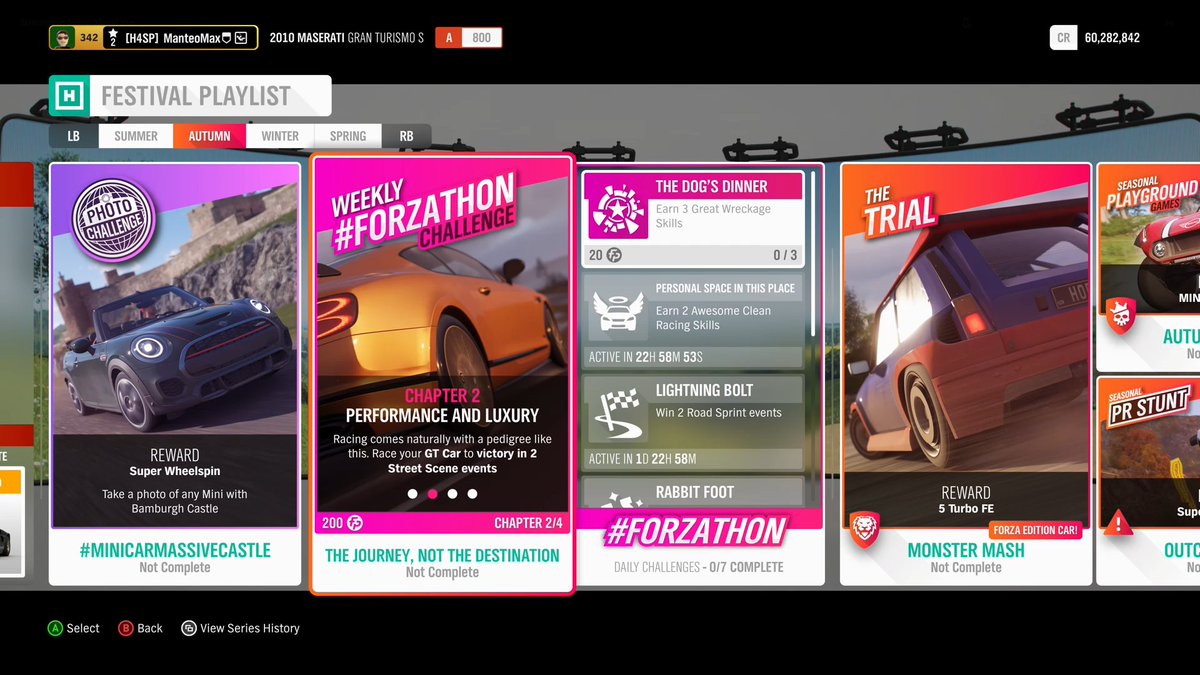 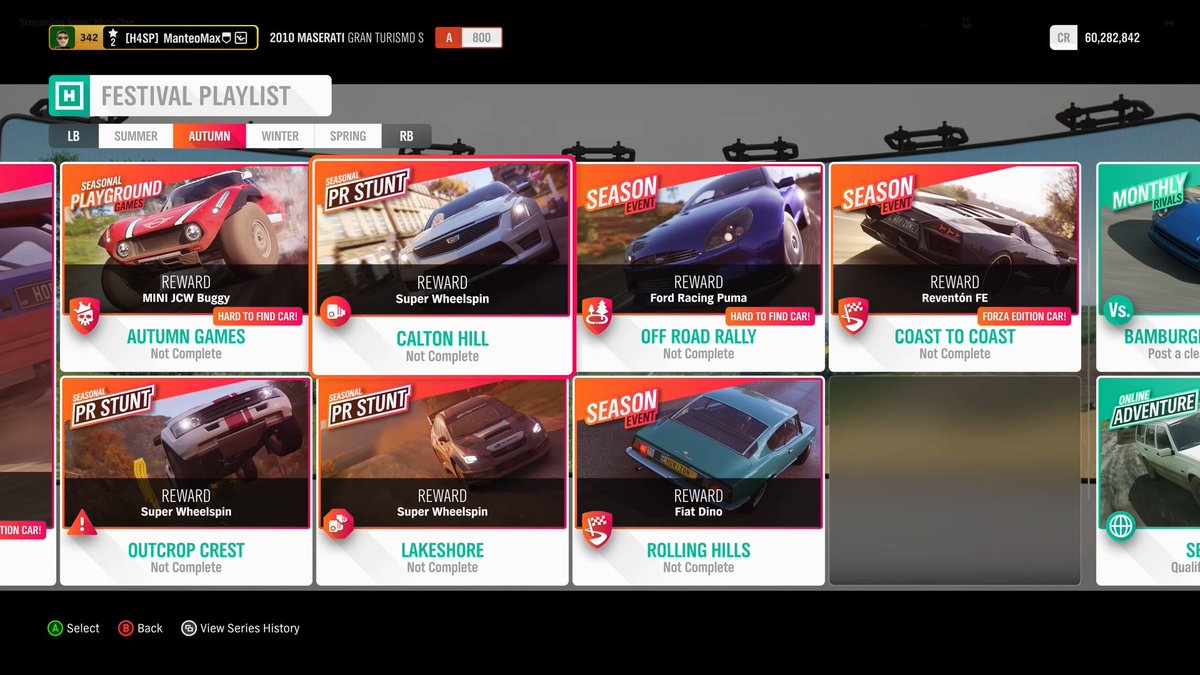 I’ve had that before.

Not a bad trial this week, gave me the opportunity to change my Renault 5 FE into something worth driving, I don’t think it’s the best choice but it did well winning 2 races and a 3rd place, would have won Greendale too had someone not walked right in front of the TV coming up to a corner causing me to miss the checkpoint and the rewind putting me in the worst possible place so having to do that twice.

I’d guess the Manta will be the best choice but I seen a WP car is an option in the Subaru, is that any good or different from the vanilla one?

It’s a specific car type about 2/3 down the filter in the garage. Mine registered using the 10 Maserati Gran Turismo S.

Edit: M6FE will probably be the fastest skill scorer if the right perks are filled.

Press Y on XBox, and you get all the car options there.

I recommend going for the Puma and buying the 205. Other than that, the month is very weak.

With more cars on the Backstage, they’ll probably shift prize priority to earning passes, but this comes at a cost: more difficult to get multiple without the AH, since you can only buy one of each car in the Backstage and I don’t know if it refreshes.

Solution is simple: remove AH altogether. But I guess PC sniping bots give MS valuable playtime to keep FH4 among the Most Played list (even without it, it would still be played a lot).

Farming orichalcum in AC Odyssey is actually more fun even though their exclusive system is worse than FH4’s (monetized and armor sets split in pieces).

Last solo championship and its D 500 road racing, with classic sports cars. First I did try MG MGB, as it had more power, but was a bit heavier then Austin, but driving it I was a bit disappointed with MGB performance. Both run vintage tires for grip and might struggle a bit on uphill section.
Austin Sprite MK 1, tune - 402 744 223

Again time for PR stunts and as always used Koenigsegg Agera RS, tune - 167 849 655 for danger sign and speed trap, dirt speed zone done with Hoonigan Ford RS200, tune - 428 155 751.
Danger sign took two tries again, as I realized, that there is no need for uphill approach, just get some run up on the road, rest done on first try, no rewinds.

Weekly Forzathon cars are from GT collection and since there is an Alfa Romeo among them, there was nothing else to pick then 8C (normal one, not FE) with A 800 road tune from trial a while ago, tune - 141 649 613, Two runs of random street scene, getting wild on the beach, while listening to skill song and one run of The Colossus + drive from Edinburgh to Bamburgh castle finished the challenge.

That brought me to final part - taking a pic of Mini at Bamburgh. So I played “spot the Mini” 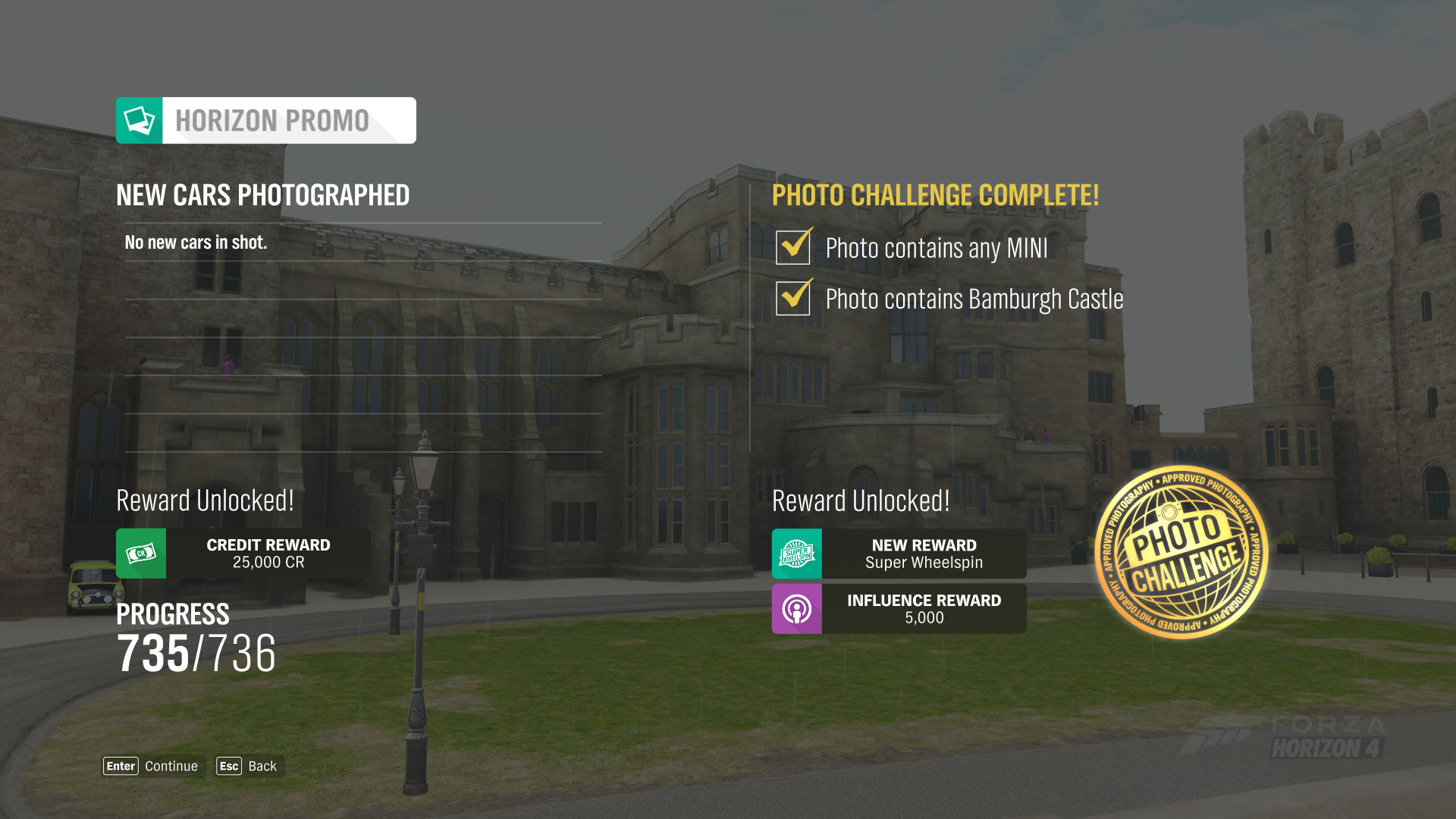 If anyone uses any other car and there is my tune for it, feel free to try them.

So hope this can be of any help to somebody, take care everyone and have fun, bb

If you had moved the camera down and to the left a little, we’d never be able to find it.

Quite a fun trial but I’m not really sure why they like choosing events where most of the cars in the category are incompatible with the class chosen. I used the WRX WP. Had good grip and was fun to drive. Won Greendale by about 20 seconds. (GreetedDust8 tune).

Quite a fun trial but I’m not really sure why they like choosing events where most of the cars in the category are incompatible with the class chosen. I used the WRX WP. Had good grip and was fun to drive. Won Greendale by about 20 seconds. (GreetedDust8 tune).

Meanwhile I’ve tried thee times and been stuck with people showing up in base models with zero chance. I literally lapped someone yesterday. Never done that before. I’ll try again over the weekend in the Opel just to Liz it up because I’ve spent enough time in the Subaru lol

Meanwhile I’ve tried thee times and been stuck with people showing up in base models with zero chance. I literally lapped someone yesterday. Never done that before. I’ll try again over the weekend in the Opel just to Liz it up because I’ve spent enough time in the Subaru lol

I just tried it with the only car I had in stock form below 800, the #199 WRX. It was plenty fast enough, I was able to win the 2nd race where I got clear of everyone at the start. In the other races there was too much bumping early on for me to get into the lead, and once everything had settled down, it wasn’t really possible to cleanly overtake anyone who was using the same car at 800, but I was still faster than them and would have been able to beat them if it were ghosted racing. If you lapped someone, it was the driver not the car. A) Photo Challenge: #MINICARMASSIVECASTLE
Take a photo of any Mini with Bamburgh Castle
Reward: Super Wheelspin

A nice opportunity to race the LFA in “Coast to Coast” this season. I had forgotten it was the right category but noticed it while running a 17 GTR. I ran the championship a second time with the LFA. Both the GTR and LFA worked well on unbeatable. I also ran it with a 17 NSX that is a high grip tune. It was tough on unbeatable but the handling is fun on highly skilled.

I used a 69 Z for the “Rolling Hills” championship also on unbeatable. If you’re in need it has an easy 300k in the perks.

I used the 09 Lancer for the “Off Road Rally”. It worked well but avoiding as many obstacles as possible makes the races easier.

Games were entertaining with the class 5 vw bug. I’ve run it a couple of times now and it keeps the games fun.

The weekly car challenge was split between a 10 Maserati GT S and a 13 BMW M6FE. Three round trips at the Otleydale drift zone in the M6 made the 1m skill score and then some. I’ve found I enjoy the dirt/snow tires in all seasons rather than the race tires. It is a RWD drift tune. The racing and some of the mileage was with the Maserati.

Edit: forgot the stunts.
Danger Sign was with the Senna to keep the speed up on the approach. The speed zone and camera were with the 98 Supra. The first attempt at the speed camera wasn’t pretty but it was close to a personal best with the Ferrari Evo. I tried from the grass side and made 200mph.

Last week I tried to win the Cult car championship with every eligible car (managed all but the Peels).
I am in the middle of the same this week, with the Classic Sports cars. No failures so far.
My target is to win the championship at the Highly Skilled level, so would win all prizes if I had not already got them.
I have turned off ABS, TC and SC.
I will try to publish the times when I have finished.

Didn’t actually tried to hide the Mini with icon. Did try to hide it more with the angle though, but then it just wouldn’t register it…
Also did try WP Subby and tried to get the slide and wobblematic suspension under control. Kinda liked final result, but still prefer Manta.

I have won the championship with all 23 eligible care, using my own tunes.

The quickest car for the 3 races combined was the Triumph Spitfire, and the slowest was the Fiat Spider (where I came 2nd at Moorhead)

I also used the El Barto Inc tune which came in 8th in total. Both of these tunes produced far better times than my Sprite one - up to 1/2 a minute!

Thanks to all who have downloaded/liked or shared my tunes.
Thanks also to the tuners above and elsewhere that have helped me get to this stage. I have a long way to go still - not having tried the tweaks yet.