I’m not even going to pick on the heinous looking wide-body which was chosen for the 98 Silvia.

My problem is, for the people who do not wish their Silvia to bear more resemblance to a Dodge Challenger, than the car it’s supposed to be, the other body mods are equally as disappointing.

What the hell is this? Rear bumper and skirts look good, but the front bumper doesn’t match the skirts, at all.

LOL, that is pretty poor.

Yesterday I went though the bumper choices as well and they were disappointing for me as well.

It’s the wrong front bumper for that kit. The one they used is just a lip spoiler. This is the bumper that goes with that kit. 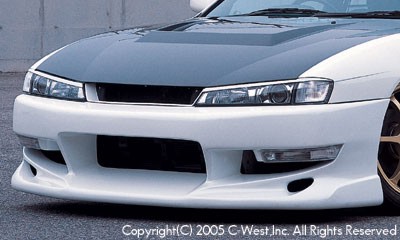 They could of at least added the zenki s14 body mods …there the same chassis… they could of added the all wheel drive conversion to the zenki to since they gave the kouki that option. I was pretty disappointed after spending $30 on the car pack to see hardly any customization… at least allow us to change the front bumper on the kouki and leave the wide body fenders.

I’d be willing to bet it’s a matter of licensing with both Nissan and the bodykit manufacturers.

It’s stock, front bumper that doesn’t match, or looking like it belongs parked next to a Pontiac Fiero that has a homemade fake Ferrari body kit.

This might be my personal least favorite car ever included in a DLC car pack in any game ever.

I was so stoked to see the Kouki S14 included, but I must agree with you. I started putting on the kit with the rear bumper, then when I went to the front and realised none of them match the rest of the kit, I just left the car with no bodykit.

Please fix this! Such a long awaited car, iT deserves Atleast one proper bodykit

I’m actually disappointed given that the 94 S14 unicorn has so many body mods, yet this happens for the K’s