500 miles in a Lamborghini reset to zero

My progress has reset from 90 percent to zero and can’t regain any progress in it. It it a known problem?

Have you tried doing a complete console shut down? Perhaps there is just an issue with your achievements application that needs to be corrected. Try holding down the Xbox One’s power button (not the controller’s) until it turns off completely. Then, reboot.

No luck trying that still the same thanks for trying anyway.

I had an issue with achievements late last night. I was just thinking it was an Xbox Live issue or something. I hope so, cause the only achievement I have left is the 325 online medals. Really hope thats not actually back to 0!

I had this same issue last night. Haven’t gone back on to the console today though.

Same with me, all my in progress achievements on forza have reset to zero and won’t progress!!! must be server issue with turn10.

Same with me, all my in progress achievements on forza have reset to zero and won’t progress!!! must be server issue with turn10.

Read the link I posted, please, and stop blaming the game.

Some people only can sign into Xbox LIVE (either platform) and then get a blank, black screen when trying to load up a game (digital or disc).

Seems like this is happening alot more lately,all on MS’s end,not T10’s.

Seems like this is happening alot more lately,all on MS’s end,not T10’s.

Yeah. In two weeks time, I can count 3 separate instances where Xbox Live services have gone completely kaput and each one of them was confirmed by an Xbox.com service alert. Interestingly enough, this resulted in an inability to log into Gamertags, even to play offline - subsequently, rendering the console useless. These effects trickled onto the web where functions like ForzaMotorsport.net also became inaccessible. The latest event was yesterday evening when there was a supposed issue with Titanfall that apparently required the need to shutdown multiple servers. Utter garbage if you ask me and completely out of line with the idea the console would not be reliant on a constant connection to Xbox Live. Unfortunately, Microsoft has our hands tied behind our backs when services we pay for become unavailable.

Yeah I have been running into issues alot lately as well. Some with being unable to log into my gamertag and others in game directly. I’ve been having a lot of sign in failures in the last couple weeks. A couple days ago, Forza 5 showed that I had zero everything except garage cars. I had no gold medals, no credits, no tokens, Nada. It keeps coming back and forth, showing I have what i’m suppose to then back to not having anything. and now yesterday with the live issues, I finally got one of my achievements to pop. It was the one for 30 career gold medals, I hit 36 gold medals and it still didn’t pop, I left my console on and went about doing things around the house and out of nowhere it popped lol. I’m not too worried though, I know eventually it will get fixed, although, with the constant hiccups and issues that xbox live has been having preventing people from playing or even using the console is rather ridiculous. Either there should be compensation for lost time (as I have two kids on only get to play every so often, and it seems like when I get to play there are live issues) or they should somehow make the games and console non reliant on xbox live or an internet connection as stated prior to launch. The inability to be able to play games when live is having an issue is unacceptable. 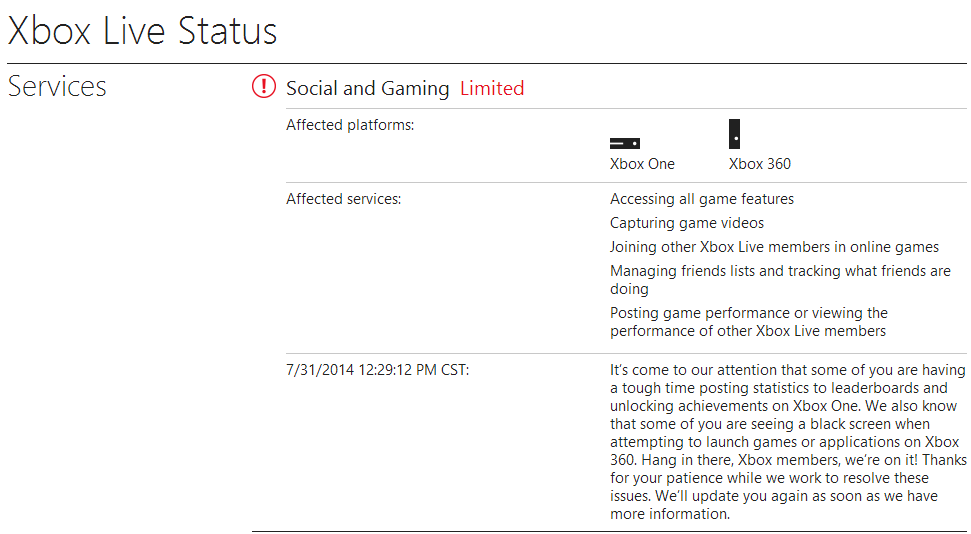 Xbox LIVE now lists only problems on the Xbox 360, with Xbox One apparently straightened out: www.xbox.com/status

From playing this morning, the achievement issue seems to be straightening out. Yeah, I had a serious pucker moment last night - seeing my Full Medal Jacket (and other progress) set to zero last night put me in a less than stellar mood. As Snow and Worm have pointed out, they are Xbox issues, not Forza. This morning, my progress was back (although it still seemed a bit wonky - individuals ones would show zero and then when I looked again, they would be back).

For me, as long as it doesn’t wipe FMJ and Long Beach Hopper, I’ll be OK. Those have taken months to get to that level.